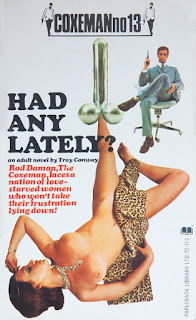 My first Coxeman left me speechless, so I think I should write something more substantial about this one. But to put any of this craziness into context, first we need to understand the story. So here it goes.

Upon his arrival, he is raped by fifteen sex-starved women and later runs (or should I say rams) into several more. One of them is beautiful sexology scientist J.R., who lives in a secluded Frankenstein-like castle doing fertility tests on gorilla Peter. J.R. is frigid and therefore off-limits (for the time being), so Rod - as a part of a scientific experiment - fucks the three women working for her. On his way out, he's frustrated and concludes that she is a "confirmed man-hater, possible Lesbian, potential suicidal type" and that J.R. probably stands for "Just Rusting".

"I, Angelica, say this. He will rest all day and night. Tomorrow morning, we will issue ration cards. For each and every woman here. Each in turn will be able to enjoy ten minutes with this remarkable man."

Rod manages to escape and eventually returns to the castle. Not surprisingly, he does score with J.R. this time around, and she goes crazy over his bouncing balls. Oh yeah - and there's an army of apes living in that castle protecting our beautiful rusting sex scholar. And another thing - Rod and J.R. discover a cause of the Sarmania's misfortunes. But things are not what they seem! Rod goes back to town, makes some calls, gets himself informed, and heads back to the castle for the final showdown after a few more lays. Upon his arrival, he then witnesses the most hilarious scene of the novel!

J.R. is lying naked on the floor, holding a pistol in each hand and is surrounded by six naked men lined up in a semicircle. They all have hard-ons (equipped with rigid weapons), and (in that cool scientific voice) she commands them to "Jump. Up and down. In position. Jog. I say, Jog!". So they start jumping and waving their balls at her, but she's still not satisfied! Seems like she craves Rod's "family jewels" specifically.

Later on, there's some silly crap about uranium mines and J.R.'s Sarmania take over, but in essence, that's it. In an abridged and very condensed version. And can I really put any context or meaning into any of this without the post running for ten pages or more? I can't. Will try with the next one since I was lucky enough to score a pack of ten Coxeman paperbacks on eBay for mere 50 bucks.

I'll just finish by saying that as over the top and silly and juvenile as it is, it never gets obscene. There are no four-letter words in this one. Instead, we are continuously treated with a never-ending streak of hilariously crazy metaphors. Rod's dick is everything from (a bit too frequently used) an old fashioned "family jewels" to a pretty self-explanatory "eight wonder of the world" or rather bizarre "red candle" and so on. I think the most memorable one is referring to coming in a girl's mouth as her "drinking of the red wine of life". Crazy stuff indeed. I needed to pause reading a few times to think over and decipher some of this nonsense.

It could have been a bit more hard boiled-ish, but it's still unforgettable.

Hero:
I, Rod Damon, am still the greatest Coxman of them all. Ask anybody.

Me. Damon. The greatest Coxman of them all. The pride of L.S.D. The noblest roamin' sexologist in the universe.

"Whoremaster!" the man nearest me suddenly shouted.
"Lecher!" cried another.
"Adulterer" another man blurted, spitting at me.
"Despoiler of our women!" another man screamed in my face.
"Beast of the field!"
"Fornicator!"
"Lustful dog!"
"Sodomist!"


Location:
Starts and ends in Japan but mostly takes place in Sarmania. Which is a little eastern European country known for its excellent rice. Yes, rice in Europe...

Body count:
Only 2. But this is Coxeman novel so let's instead list all the fucking:
So the total count reaches 31

Dames:
Bewitching nymph Mariko -  She had graduated from Japanese burlesque to Number One Queen of Tokyo Films Ltd, but there was nothing limited about her. At the ripe old age of twenty-two, she was older than Time itself in the Sex Department.

Allie de Marpana - the bellboy (or the bell-girl): "Her eyes were as blue as the Navy and her lips as red as Heinz ketchup."

Blackouts:
After being raped by 15 women:

I, the future author of one of the rarest works in THE FETISH ENCYCLOPEDIA, ten volumes inclusive, was raped by fifteen women on the morning of my arrival in the sleeping dominion of Sarmania in the year of Our Sex, 1969. Me, Rod Damon, head of L.S.D.
Dingalinga.

Have no idea what "dingalinga" is supposed to be, but this is how he "dropped off":

But there is a limit. There has to be. The blood in my head began to dance a merry jig. The room tilted. Above me, the panting mouths, the dangling mammaries, the gyrating pelvises all converged into one roaring central region of burning blackness...
...
I did the only sensible thing under the circumstances.
I dropped out.
I fainted.

Even though Rod is unconscious, he still somehow manages to hear women admiring his firmness. Because - and do I really even need to clarify this? - he keeps his hard-on, and they keep fucking him and arguing about whose turn is next! 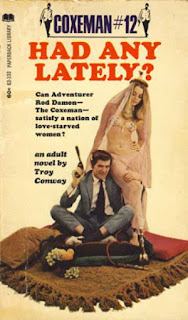 But I'm not sure if this is the 12th or 13th of the series. When I was looking for a cover image, I came across the one that states this is 12th, but mine says it's 13th.

Cover:
Provocative and cool, but it should really be that scene with J.R. naked, holding guns and surrounded by bouncing balls.

Cool lines:
She didn't stop until Grand Central Station was firmly positioned where I could enter and drop my baggage.

She had a gloriously slick and comfortable resting place for the family jewels.

I pressed with my thumbs until both of her half-moons widened into a glorious entrance-way to the stars, to the Valhalla of womanhood.

My formula for instant sleep was very simple. I closed my eyes and counted naked Sarmanian peasant girls jumping over the window sill of my bedroom, breasts bouncing, fannies bobbing.
Posted by Jure P. at 10:14 AM