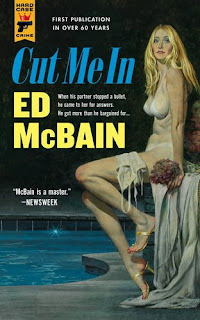 Routine stuff, I don't really have much to write about it. I'm not even sure whether it qualifies as a 'proper' mystery novel. I mean, it does have all the required ingredients like corpses, beautiful women, cops, show biz background etc... but our hero is more or less completely oblivious to all this. Josh Blake has lost an ultra lucrative contract that would launch him and his publishing company into the big time, and now his sole interest is in getting the damn paperback.

It does start a bit more promising. We find our hero hungover in the opening scene and just awaking next to some beautiful girl. One night stand it was, and he cannot even remember her name. A bit predictable but still cool as this can mean nothing else but that sooner or later, he will need her to confirm his alibi for the last night. The next scene is a nice nod to the Maltese Falcon - Blake's partner was killed, and now his freshly widowed wife tries to seduce Blake. But he doesn't care much about Gilbert's demise or his horny wife. So everything is set for an "innocent man without an alibi on the run" type of story... which unfortunately never materialises.

Instead, it turns into a very simplistic and rather dull affair that loses its suspense with every chapter you read. I would say that the most ridiculous one is the 9th, in which Blake gets abducted by two thugs. But don't expect some hard-boiled beatings and/or interrogations and/or spectacular shootout escape because our trio soon starts drinking and playing cards!

With lots of dialogue, simple language, a flat storyline and some sexy bits thrown in for good measure, it at least isn't boring. Quick read but unfortunately not particularly enjoying one. McBain or no McBain...

2.5/5
(like for So Nude, So Dead, I'm adding an extra half point for the included excellent short story Now Die In It)

Dames:
A bunch of them: Lydia the secretary ("a shrewd, talented bitch"), Mr Becker's secretary (with just a single appearance and without any role whatsoever but still "one of the most thriving creatures I had ever seen") and of course "cleanly built, with full, flowing curves" Cal Stewart.

Hardly surprisingly, he loses consciousness again after drinking a shitload of vodka and gin. But what is weird and doesn't exactly make sense is that less than two hours later, he manages not only to wake up but also to drive to Miss Stewart's house, where they have sex. Strange brand of Vodka indeed...

Title:
Not sure how to interpret either the original or the new one. In both cases, it got something to do with that copyright contract. Were those TV rights proposed to Blake? Was he cut in on the deal? Does it even matter?

Cover:
By McGinnis, one of his trademark long-legged beauties. Not sure why this one has sore knees.