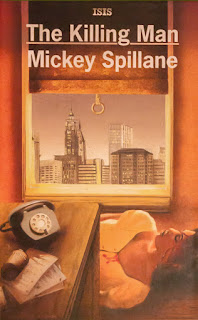 Not sure what the story behind The Killing Man is, but according to Spillane's Wikipedia page, it was originally published as a short story and later adapted into a novel that also came out as a serial in Playboy magazine. Have no idea which came first, but that serial concept would explain why this is all over the place.

Once again, Hammer doesn't even get properly hired by a paying customer. Trouble finds him when he walks into his office on a Saturday noon. He finds his beloved Velda beaten, unconscious and half-dead lying on the floor. Keeping her company is some very-dead dude tied to a chair. Tortured, his fingers cut, and with a sinister, threatening message addressed to our hero pinned into his head. A bit gruesome, but so far, so good. This shit is going to be personal!

We have a fluke going here and I don't know where or how, but damn it, I'm involved now. I'm sure as hell involved. When he put Velda down I was in and I'm going to stay in until that fucking psycho gets nailed to the wall.

But then, with every single chapter (or was it every monthly Playboy issue?), it goes wilder and crazier, and I got the impression that Spillane didn't really have any concept and was just making up this shit as he went along. Because it soon doesn't make any sense whatsoever. The plot doesn't progress one little bit, and the only amusement I had was to predict/guess who/what will come on the scene next. We start with the usual NYPD and DA involvement, joined later by the State Department, CIA, FBI, Mob, Medellin drug cartel, some super-smart guy called General Skubal, etc.

And yes, you've guessed it by now:

"Penta's beginning to have an international flavor." +
"...the security of the United States could be compromised."  +
"Now we're into the heavy cocaine scene."

Wanted to like it, but it really is a mess. In the end, there's some ludicrous vice-president assassination attempt/plot thrown in, and the big finale twist is nothing more than an amateurish "twins mistaken identities" trick. Depressing read. It made me a bit sad about the ageing maestro...

Published 20 years after the previous Mike Hammer novel, I would speculate it was meant to be some kind of an explosive come-back and was therefore intentionally written in such an over-the-top style. Again, I'm not familiar with its back story and to be honest, I'm not intrigued at all to do research (but will definitely try to find the original short story!). I thought that The Goliath Bone was the lowest point of modern Hammer, but I think this one beats it.

Still grinning all the time (43 times to be precise), still bossing everyone around without hardly ever saying "please" or "thank you", still calling everyone kid or kiddie (and women are still kittens, dolls, sugars, honeys,...).

But he is getting older because it's been four years now since the last time he "took down" a bad guy (that "son of a bitch Julius Marco"). And in this one, he also makes just a single kill:


The grin got to him. I was grinning at him the way I had at his brother back in the courtroom...
He had thrashed around so he was pointing away from me, blood spatters streaking the wall. I felt some of it on my face and grinned again...
The agony foaming at his mouth. He saw my grin again and choked out another scream...
There was one smashing roar of the .45. His blood went all over the place. Fresh specks of crimson were on the back of my hand. I stood up slowly and gave him a hard grin he couldn't see any more.

But since Penta is so elusive and secretive, his killings are impossible to count. We'll need to trust General Skubal's super computer database: "Sixteen known assassinations were attributed to him, all of them with various forms of digital butchery done to the victims."

And in case you were wondering:

Object of desire:
Like everything else in The Killing Man, this too is hard to explain. At first - pretty out of the blue - Candace comes with this:

She put her finger under the $905 million total and said, "That's what they want to kill you for, Mike."

I don't think it ever gets explained how Ice Lady came up with this number, but I think it represents the street value of "tractor-trailer solidly loaded with the purest cocaine you could find". But a bit later, she must have recalculated the whole thing or used a different methodology:

"Wild, huh? Tell me something. How much is the street value of the junk today?"
She told me. I let out a low whistle. No wonder Penta could afford to pass up the VP for an old hood. Nine-digit figures are understandable.

Dames:
Candace Amory, presently working as an assistant to the district attorney but aspiring to become the president of USA:

She was a tall patrician-looking blonde with a cover-girl face and a body that didn't just happen. Every bit of her was carefully cultivated and when she moved you knew she danced and could ski and in the water could take two-hundred-foot dives in scuba gear.

You would never call Candace Amory "Candy." You would want to kiss the lusciousness of those full lips until the thought occurred that it might be like putting your tongue on a cold sled runner and never being able to get it off.

There was a dominance about her that she was exuding like an invisible veil and I smiled, just barely smiled with my eyes licking hers, and for an instant there was the minutest change of expression, the cat suddenly realizing the mouse was a cobra, and the veil was sucked back in.

It goes on and on, and I don't want to bore you or myself with cobras and scuba gears.

"Let's keep it simple and square, Miss West. No secretary garbage."
"Oh?"
"You're CIA, aren't you?"
There was no hesitation at all. "Yes, I am. Why should you ask?"

She has no function/role in the plot whatsoever, but still, there's a four-page description of her:

Some women can hit you with a visual impact you'll never forget... total thing that makes them woman...crazy electric blue eyes... beautifully full breasts... generous swell of her hips... she had a dancer's legs, muscularly rounded, but perfectly curved... they hardly make them like that any more...  "You're some kind of doll, Miss West", "Please, call me Edwina."... "Watch it, Edwina, you're touching nerves I didn't know I had."...

But, having a role or not, this "perfectly curved" spook lady and Mike almost end up fucking mere five minutes after they've met. But Hammer is on the case. He needs to go and simply leaves her with:

"You are one special woman, Edwina. The air seems to shimmer around you. I can feel your body heat and watch you pulse with whatever's going on inside that body of yours."

And let's not forget about Velda:
"Velda. Beautiful, gorgeous Velda. Those deep brown eyes and that full, full mouth. Shimmering auburn hair that fell in a page-boy around her shoulders."

Blackouts:
It wasn't a mugging. I felt the needle go into my hip and within seconds the drowsiness started.

Title:
"That one son of a bitch is going to fall. I don't give a damn what happens to all the money or all the coke as long as I get that bastard under my gun. We're playing around with somebody who likes to kill, likes to get paid for killing and likes to sign his name in chopped-off fingers."

But I think it should simply be titled "Penta" since this super assassin's code name is mentioned no less than 126 times! Or even better, what about "Penta, Penta, Penta" or "Killing Penta" or "Penta Killing"?

Edition:
Clio Press, 1993. Published in "Large Print", which was something entirely new for me. Hardly any margins and font size so large that it makes the book almost 350 pages long!

Cover:
Nice illustration credited to Kevin Feeney. For the details, see the bottom of the 'dames' section.

I couldn't play it smart. I had to explode and rammed through the door in a blind fury ready to blow somebody into a death full of bloody, flying parts...[The Coolest!]
Posted by Jure P. at 8:45 PM