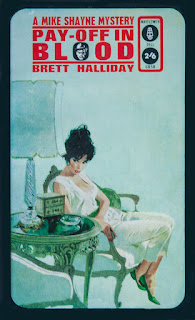 Blackmail goes wrong as the victim is murdered shortly after the money handover. What makes this short little pulp unusual and memorable is that none of the protagonists seems much interested in the blackmailing aspect of the crime at all. Our gumshoe hero, his side-kick friend and cops just want to find out who the killer is.

Fast and furious. Lots of stuff happens, and it happens in less than a couple of days. Shayne is super busy and relentless on his hunt. Even though he has a reputation as a ladies man, he ignores the advances of Miss Belle. Two goons "put him out cold" (see the facts below), but he returns the favour by kicking the shit out of them and their asshole debt collecting boss. Where does he get all this energy, I wondered. Maybe all those cognacs helped?

Good stuff with some excellent plotting and a clever twist that I didn't see coming. Maybe a bit too old fashioned for the 60s, but that's the way I like them. My only little objection would be that it's a bit too fast. Apparently, Davis Dresser got tired of writing Shayne in '58 and handed the series to a publisher. I assume that he supervised the novels anyways and maybe imposed the word count limit on his ghostwriters? It doesn't really matter, Pay-Off in Blood definitely pays off!

"Give him a fast shake-down, Jud. This joker has a rep for having all sorts of tricks up his sleeve."

By the way, I watched The Man Who Wouldn't Die after reading this one and found the whole thing a bit too silly. Are the TV episodes from '61 with Richard Denning as Shayne any better? I can see on Amazon that in 2007 a DVD came out with a couple of episodes, but it's a bit pricey...

Dames:
The widow:
"...one of these, well, sort of professional southern belles... pretty and plump and young-looking, and never forgetting that her family was real southern gentility... the way she'd been brought up, she just couldn't help flirting... soft, platinum hair... very wide and very blue eyes..."

Had some troubles imagining Belle - what the hell is "well-fleshed, un-lined face" supposed to be!?

Blackouts:
"Put him out cold, Jud."
Jud was, as Shayne had realized the first moment he saw him, a professional. He carried out the boss's order swiftly and efficiently. Shayne felt numbing pain, and then he heard no more and was conscious of nothing more for a long time.

Title:
A bit over-dramatic, in my opinion. The thing is that blackmail money handover does take place without any problems, so pay-off is not exactly in blood... But still sounds cool and definitely better than something like "Bloody Pay-Off".

Cover:
By Robert McGinnis, beautiful and hot as they all are. Would assume that it wasn't commissioned for this novel specifically since the lady is neither Doctor's widow (soft, platinum hair) nor his nurse (hunk of a woman).

Cool lines:
"Lots of people come to me who are being blackmailed. Just as people come to you with venereal diseases. Some deserve it and some don't. How bad is it, doctor?"

To be honest, this is one of Shayne's rare witty ones. Mostly his retorts go as far as a cynical "Very, very funny". But there are some cool lines reserved for the bad guys:

He relaxed against the seat cushion and asked, "All right if I reach for a cigarette?"
Jud said indifferently, "Sure. Just don't make any sudden moves because my trigger-finger is nervous."