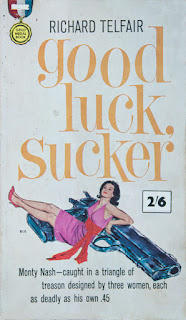 D.C.I. spy Monty Nash is flown all the way from the UK to some US Marines base in Puerto Rico to be briefed about the two of their European agents (one in Paris, the other in Rome) that have gone rogue. You might wonder why D.C.I. couldn't simply put together a conference call with all parties involved (Monty, his boss and Marines general) during which Monty would be told where to go and who to kill. Wonder no more - the thing is that Americans wants to test Monty's skills before trusting him with their dirty laundry.

So this (pretty idiotic) test takes the first 20 pages. Once he passes it (with flying colours, of course) next 20 pages are spent on his briefing and another 20 on his preparations for the mission. Must admit that at that point, I slowly started to lose interest. Just seemed like the damn thing didn't move anywhere.

But then, after a couple of decent killings, it gradually does start to come to life. And there's a pretty funny interlude at this point. Things are going smoothly, and the story is trivial and easy to follow, but still,  there's a four-page break in which Monty dictates a report to the H.Q. describing again everything that has happened so far. Not sure why that shit is there since it's totally unnecessary. It almost feels like Mr Telfair doubted the intelligence of his readers and their (mine) ability to follow his narration or comprehend the plot. Whatever. It doesn't hurt, and the intro to his briefing is super cool (see 'hero' section of the facts below).

So now we are in Paris, and after two more corpses, we come to a cross. The Cross! You can find its full definition on top of page 92, so I'll give you just a brief one. A cross - in spook lingo - is basically when investigations of the two agents working on separate cases cross paths. So Monty is crossed by (or with?) Phil Tate, his fellow spy from the London office. And this brings us to the coolest and most memorable scene of this book. After the two killings mentioned above, our two spies need to synchronise their stories before giving the "official" one to the french cops. Mind you, guys from Sûreté are already there on the crime scene, so they hardly have a minute or two available to do so.

But they do take their precious fucking time! The whole frantic and, at times, hilarious exchange of ideas and information takes almost ten pages. But all you really need to know about it is this:


So we have a leak in the Marines Corp and Red Cadre behind it. It's funny and a bit unusual that reds (Reds?) are never really identified. Are they Russians or Chinese? Maybe Bulgarian (one bad guy has Bulgarian roots), or is this menace coming from the Korean peninsula (where both of our suspects were held as POWs). We will never know, and it's not really important. Communist threat was global during the cold war, right?

But it gets better as it progresses. Monty does use his brains occasionally and not just his muscles and trigger finger. His investigation finally brings him to Rome, and at this point, it seems like Mr Telfair got bored with the whole thing, so Monty simply shoots all the bad guys. The End.

It's okay, probably 50 pages or so longer than it should be. Don't think I'll pick up another one of this series.

Hero:
Monty Nash, a spy for D.C.I. - Department of Counter Intelligence. Seems like the Brits have another CIA like organisation besides MI6. But apparently, it is so secret that even Google doesn't know anything about it.

I not only had to get out of the can, but I had to get things rolling. I called Operator 25.
The voice that answered was softly accented.
"Code Rascal," I said.
... "What is the name of the character and what is his status?" she asked, in a tone of businesslike efficiency.
I couldn't help but smile. "Mickey Mouse lives," I said.
"The number of your party is Santurce 7890," she said.
"Thank you." I depressed the receiver and dialled the number. A thickly accented voice answered.
"Hello?"
I waited, counted ten and then spoke. "One," I said distinctly.
I then started counting to myself. "One-and-two-and-three-" and up to twenty. He came right in on the beat of "twenty-and-" with his reply.
"One-hundred-and-one," he said.
"This is Montgomery Nash. Know about me?"
"Nothing except that you're here in PR [Puerto Rico], Code Rascal, and you get the red-carpet treatment."

Body count: 13
Before the final shoot-out, Monty himself calculates the body count, and I'm pleased to say that the figure he comes up with totally matches mine: it is eleven. But then he kills another two:

This made it thirteen dead. Far from a record. But I was keeping my average up... I was hot. Man, I was going. I was killing left and right.[The Coolest!] 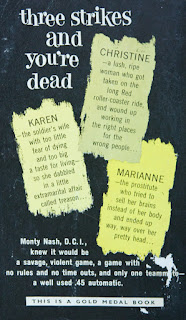 Dames:
See the back cover scan. Needs to be said, though, that women play a minor role in this one. In fact, all three are killed, and two of them are treated like shit by our macho Monty.

Blackouts:
Yes, he passes out when two assassins try to kill him (it was a near miss).

Title:
[from another of top-secret communiques]
"That's tough," I said. "But do you know why we get all the breaks?"
"Why?"
"We're smarter than you are."
"Sure," the voice was still needling me. "Good luck, sucker. When they start shooting at your head from dark alleys, I'll be a solid citizen of Puerto Rico enjoying a refreshing rum collins while I lounge around on the beach and study neat little rumps in tight bathing suits."

Cover:
Chick & Gun - what a man's adventure books are all about!

Cool lines:
"Where shall I put the boxes?"
"What boxes?"
I didn't answer that. She was a woman. And I said I had boxes. She would open the door. There isn't a woman in the world who could have restrained herself.

It was something I had learned a long time ago in my work as an agent in D.C.I. Strike a genuine, one-hundred per cent U.S. citizen and you strike a man that will drop everything and come running when Uncle Sam needs them.
They have, they do and they will.
And that's the difference between them - and us.
Them.
The Red cadre.

I had the .45 out then and started throwing lead.[The Coolest!]

I waited.
I waited some more. One minute, as long as eternity.
One more minute, longer than eternity.[The Coolest!]

The sound of my gun had been muffled a bit in the fog. Not quite enough.[The Coolest!]
Posted by Jure P. at 3:35 PM