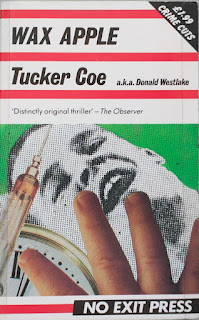 Structured somewhat similarly to the first one of the Tobin series Kinds of Love, Kinds of Death. Once again, our disgraced hero must pause his garden wall building and investigate a crime in unusual surroundings. But nothing as exciting as a mob underworld this time - he needs to find an injurer in some local sanatorium. An injurer? A person who plants nasty booby traps in a sanatorium, thus injuring patients.

Again his investigation is based on a list of suspects, and he methodologically checks them one by one. At least he tries to. But to be honest, he has no idea what to do. Three quarters through, he gets so lost that (out of the boredom) he even starts reading some psychoanalytical books. It never gets explicitly confirmed whether those books have enlightened him, but he finally does get an idea!

So what's this brilliant idea, you might ask?
- Let's search the suspects' rooms to get some clues.

Mitch and his team of amateurish detectives made up of two doctors and one trustworthy patient promptly perform this room-by-room search and... find nothing. So still no breakthrough. In fact, they remain totally clueless until the very last ten pages before the end. Which got to be some kind of a record in crime novels. But even if I'm wrong here, this super incompetency isn't something I'll remember Wax Apple by. It's the grand finale, the mighty round-up and culprit revealing scene, which probably still makes good old Agatha spin in her grave.

By now, our hero has somehow managed to narrow down his list of suspects to the last six and decided to wrap up the case during the group therapy session with all of them rounded up. Even though he still doesn't know who the guilty party is, he is determined to get to the bottom of this mystery. Somehow. His first technique is to reveal to the group that the killer left him a note... and then observe suspects' facial expressions when reacting to this shocking news. But nothing. Then he tries to bullshit them by pretending that he knows who the killer is but lacks the evidence. This bluff also doesn't pay off. As a last resort, he starts pleading with a culprit to reveal themselves and surrender. Which, of course, doesn't happen either... so there's nothing left to do, and the session continues without anyone even mentioning the crime!!! But eventually, Mitch gets another brilliant idea (pretty sure that those books did help him on this occasion) and breaks the case.

I like unconventional and unintentionally funny anti-climax endings (this one isn't too bad), but this crap is simply pathetic.

150 pages of small print without much white space at all. Endless dull descriptions are sometimes broken into no more than a couple of paragraphs per page. Poor dialogues don't help bring characters from their comatose state. Uninspired and simplistic plot... It was just a struggle to finish this one.

You never know with Westlake. The last one of his that I read was "The Comedy is Finished" a few months ago, and I really liked it. He is the Grand Master, but I think he was too prolific, and some of his stuff is very mediocre. Like this one which is memorable only for its crazy ending. Skip the whole thing or just read the 24th chapter.

Blackouts:
Yes, almost immediately upon his arrival, he becomes another victim of the injurer when he falls down the stairs and breaks his arm: "When I hit I heard the dry quick snap in my right forearm. And nothing more."

Title:
Mitch is admitted into the conservatory in a "Shock Corridor" manner. Undercover, pretending to be a patient:

"But I was in neither camp, really. The man in the brown suit would no more accept me as a policeman than these people would accept me as a resident. I was a wax apple in both bowls."

Cover:
Generic but pretty cool. I like the vivid colours on a white background.