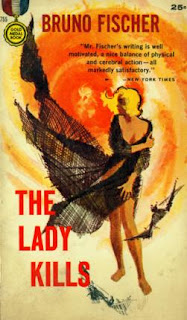 Two acts. As predictable as it can be, the first one is pretty cool. Right away, on the very first page, our hero tells us that "already I was being bewildered by her; and it would be years through passion and heartbreak and blood, before I would stop", and a couple of pages later, her father warns him that "she won't be good for you, son". And so, as the title has already hinted, we have a femme fatale. What follows is the formulaic conflict of the free press vs the evil alliance of politicians and mobsters. Plotted nicely with suspension and body count rising slowly but surely. But when it reaches its peak, when our hero gets properly fucked over (literally and figuratively), it digresses from its formulaic path. It just stops.

Instead of fighting back, Simon simply packs his shit and leaves the town. And goes back to live with his parents! For five fucking years!! And then he returns to this small town. And the second act follows.

Okay, so he's no hard-boiled bad-ass tough guy. But by now, he has become the owner of the local daily newspaper. One would expect that he would turn into a relentless crusader and do some serious Pulitzer prize-winning type investigative journalism to expose the bad guys and win back his girl. Well, one would be wrong. At least I was. He falls for another girl instead, and the whole thing becomes more like a melodrama than a hard-boiled novel.

Which was a little disappointing, but I didn't mind that much. It's still cool. The cover blurb quote from New York Times promises "a nice balance of physical and cerebral action", and I tend to agree with it but would add that neither of those is delivered sufficiently. A twist or two wouldn't hurt as far as the cerebral aspect goes, and a bit raunchier sex than simple "domestic bliss" (see 'cool lines') would make the physical action part more interesting.

Hero:
Simon Field, initially the editor, then promoted to a reporter and finally the owner of the Indale Star daily newspaper.

Dames:
Beth Antler: "I've never yet had trouble handling a man, whatever his age" [Fatale]

As a two dimensional greedy and possessive bitch as she is supposed to be, it's unusual that parts of the novel in which she appears actually breathe with life and vitality. I think Fischer must have really liked writing about this girl.


Blackouts:
None, but it's pretty close. Simon gets beaten by a couple of  thugs who leave him afterwards "crumpled to a miasma of sickness", but the following paragraph simply concludes the action with "Time passed. Gradually I realized that I was alone in the street."

Title:
"You enjoy killing, " her father had once told her. 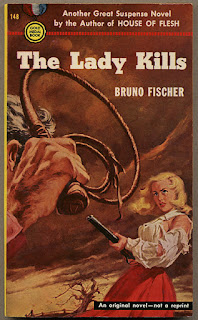 Cover:
Super cool and seductive. It depicts Beth (minus her eternal cigarette) in a scene where she uses her feminine charms to get something from our poor Simon. A scene that will reoccur several times in different variations.

I found her waiting for me in the narrow upstairs hall, and she was wearing nothing but a Turkish towel and her eternal cigarette. A big Turkish towel wrapped completely about her from under her armpits to halfway down her thighs and held together by one hand at her bosom. It covered her as adequately as a short robe.

Beautiful illustration. I love that vortex in the background. It's definitely in the top ten of my modest paperbacks collection. Was really surprised that Google search didn't find it (it came up with the original Gold Medal edition #148, which is also fantastic).

Cool lines:
"I think that few men can be rational under the assault of luscious female flesh." [The Coolest!]


She moved her mouth up to mine.
After a minute I said lightly, "One thing is sure: I haven't a frigid wife."
"Again so soon, dear?"
"Again and again and forever. There, that's it, Mrs. Field, you're doing fine."
"I feel so brazen, Mr. Field."
"This isn't brazen. This is domestic bliss. Sweetheart!"
"Oh, Simon, my husband!"
Posted by Jure P. at 4:58 PM