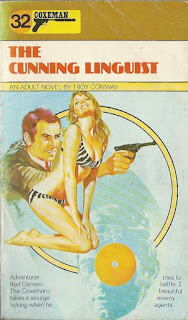 And now for something completely different! Why not finish this year in some style?

Won't even try to analyse this. It cannot be done; it is indescribable. And my vocabulary and my sense of humour are both beneath this little masterpiece of craziness. Just take a couple of minutes and go through the facts section below. Satisfaction guaranteed!

Not even sure to call it a guilty pleasure, but this deserves five out of five stars for its sheer insanity. Cannot believe this stuff was actually written. And published. And that it followed 31 novels in this series!

So happy new year 2016! I'm off to eBay to buy myself a gift. Yes, you've guessed it - more of the Coxman's adventures. They are a bit pricey, but I have no doubt that this will be money well spent! Stay tuned for more of Rod's whipping...

Hero:
I am a Wisconsin Whoremaster, after all is said and done.
But still a spy, for all of that. A Coxeman, a secret agent, a transatlantic James Bond with wheels on. A very hard working spy, to tell the truth and shame the Commies. Nobody had accomplished more in so short a time as Rod Damon.

"...the leading sexologist in the universe. Since I am barely thirty, and am well-hung and uncomplicated, I am the cock of the walk. And rightly so. I have made thousands of female truth-seekers happy."
"No man is bigger than I am. Nor as insatiable. I simply can never get my fill. My women have to quit on me long before I do."

But I'm reluctant to think Rod's rod is probably the actual hero. Only that it's not called a rod or something as vulgar as dick or cock or even penis. Instead, it ranges from the good old fashioned "family jewels", "shipping department", "heavy artillery", "secret weapon", "instrument of desire" to somehow more daring "shaft", "whip" and "ploughboy" to slightly bizarre "glittering kingpin" and "Great White Waler". Among others...

Or simply "my greatest gift to womankind"!

Sally Parker had stretched  the truth a bit in her gratitude for the kicks we had had. Let the truth be known. I'm not fifteen inches, bless her two-coloured eyes.
Fourteen and three quarters is nearer the fact.


Location:
Like The Devil's Cockpit, this one also takes place in Budapest. Once again, Red Commies are plotting against the USA on Hungarian soil (btw - Hungary is frequently referred to as "Over There"). But Rod hasn't done his homework in geography because he flies to Munich and then drives a small Fiat for 12 hours to Budapest.

And it seems like Mr Conway had also missed a lesson or two in geography since Rod was able to see Austrian Alps from Budapest (app 400 kilometres away). Not sure if he had been aware of a political situation during the cold war either because Rod was able to cross the Hungarian border pretending to be a travelling salesman (selling bras) on his way to a convention in Budapest.

But I'd better stop; this is just some needles and pointless hair-splitting. We all know by now that Rod has plenty of other talents, right? Fuck geography, who needs it!

Body count:
Only 6, which is probably a record low for a super-spy adventure novel. And there's a good (big?) reason for such a low total:

I'm not much for guns. I think better without them. Anyway, my other gun is quicker and far more reliable. I definitely do not like killing people. Any kind of people. Maybe that's another reason I am one of the world's greatest lovers.

Object of desire:
Albanians (?!) working for China (!?) trying to stir shit between USA and Russia:

"Say, a colder cold war, where the Soviets will eternally worry about the U.S. and not about China nibbling away at her Siberian border? Yes, that is even better, I think. It is devoutly to be desired."

Dames:
First and foremost, there's Magda. For her detailed and juicy description, I suggest you read page 40. But some short ones below will give you a starting point:

She was the Lust and the Bust and the Power and the Glory. All in a nice wholesome blonde package.

My kind of woman, all right. Her raison d'être, like mine, was Sex!

And then there's mysterious Siri, and we come to the only part of the Cunning Linguist I didn't like. Because you see, Siri is a Lesbian (yes, with a capital L) and (as you would expect) Rod's mission is to convert her into a "real" woman. Which turns into a bit nasty misogynistic crap, to be honest...

Whatever Siri was or might turn out to be , personality-wise, there was nothing wrong with her in the physical department. In a word - ring-adinga-ding! ... was a dream out of Orgyville... Her face was an oval of amazement. A remarkably chiseled set of features, as if they had been chipped out by a Michelangelo.

But the finishes of the two scenes (each one several pages long) in which Rod has sex with them for the first time are unforgettable.

Magda (after she has been "demolished sexually"):
"Merry me... Never have I - you must whip me again and again. I want you to whip me twenty-four hours a day."

Siri (after her "Venus Mound had been bombarded with monumental force and savagery"):
"You will stay with me... and we shall live happily ever after."

And in case you're confused about that Magda's whipping, do not be alarmed! With a couple of exceptions (again, both funny as hell), there's no fucking. But we do have "whipping", "scourging", "tattooing" (!?!), "jouncing", "pumping", "love-humping", etc, etc

Blackouts:
nope, unless we count an orgasm as a momentary loss of consciousness

Title:
I know what you're thinking but stop your dirty mind! Of course, Rod is cunning and speaks several languages (Hungarian - the "goulash language" is one of them), but the title is about Siri. She operates the "Transmitter X", which intercepts the radio signal of "Voice of America" (don't ask) and uses her linguistic skills to impersonate and alter voices of the UN speakers (I told you not to ask!).

"This Siri. A cunning linguist, a great scientist, a sex fiend, and a bit of a maniac. It was frightening. I stared down at her  with fresh respect."

Cover:
Rod and Magda (we can tell this for sure because Magda is blonde and Siri is dark). It's sexy, but it could be better (as all the American editions covers are). For one thing, Rod's face looks stupid. And he uses a gun only once (he uses The Gun frequently, though!). Plus, I don't recall Magda wearing a bikini...

Notable cover blurbs:
There are no blurbs, but the back cover story summary describes Rod as a "Capitalism's favorite tool", which is spot on!

Cool lines:
The whole damn thing is infinitely quotable. I simply stopped taking notes because it took me too long to actually read it. Here are some of the finest:

As much as they wanted me, they wondered how they could stand up to such a man. I smiled to relieved their fears.

[after the whole chapter of fucking the triples on their birthday]
Nobody, man or woman, on their twenty-first birthday, has ever blown out a bigger candle.

I stepped out of the shorts and shirt and let the horse escape from the stable. Never have I seen a woman's eyes try to pop that much out of her head.

I could tell she'd been to the races before. She'd obviously just never had a jockey as big as me. Poor denied child.

I only hoped they wouldn't shoot me below the waistline. The undertaker that gets me ought to get the thrill of his life.

We moved as a unit and produced barrels and barrels of oil.

One thing I would never do is kill a rabbit. Or a bull or a rooster.
Like me, they have far too much to live for.

She looked good enough to eat. I intended to do so if the opportunity presented itself.

For a woman in her thirties, I must have been something not to be believed or confused with reality.

She shifted her snake pit to accommodate the sliding majesty of that with which no other man is blessed.

But speaking sexually, I was my own thermonuclear fallout. Ask Siri, ask Magda, ask anybody. No explosion they would ever encounter would match the galvanic, bombastic assault I was now delivering for their education, edification and exhilaration. I was slamming them with all the slam at my command.

And for the grand finale, let me leave you with a list of Rod's sexual techniques. Each and every one of them is totally insane, and I'm not sure if I understood half of them. Unfortunately, his sexologist books are long out of print (apparently, he has sold over three million copies), so if you're interested in a particular one, send me a message. I'll be happy to transcribe it and send you the details. Or even better - go find this book and check them all yourself! You won't regret it...