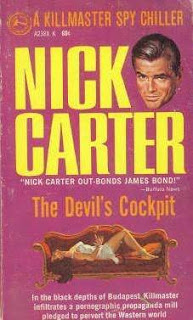 After I'd read Ice-Trap Terror, I started to check out the back covers of Nick Carter paperbacks. Not that I've been expecting to find some plot that would surpass the one from Ice-Trap in its insanity (nothing can), but it's always fun to read about some crazy doomsday machines nearly finishing off our civilisation unless Killmaster is there to save us all. The Devil's Cockpit is not one of them. It merely promises a total "destruction of the West". Which in itself wouldn't be all that interesting if the means of such destruction wouldn't be anything more than pornography:

Somewhere in the dark pit of Budapest, a highly trained group was producing thousands of reels of pornographic propaganda for a terrifying, barely human reason - total destruction of the West!

It's a bit vague and intriguing as a good blurb is supposed to be. Since sex still sells in my book, I had no troubles departing from three euro coins. A wise decision this proved to be indeed!

Needs to be said, though, that this sex angle doesn't get much clearer. What is clear is that yellow commies are shooting skin flicks in Budapest (?) using some ex-Hollywood actress as their star. Three actresses (models/prisoners?) die after and not during the filming, so I don't think these are snuff movies. Especially since they are shown to millions of Chinese comrades (which btw poses the question of how can that corrupt Americans?). I probably did miss something, and it's not really important because they are also guilty of another, much more serious corruption - flooding America with smutty comics based on children cartoons:

One could not, without extreme revulsion, accept the perverted sexual antics of Blondie and Dagwood, Maggie and Jiggs, or watch the seduction of a willing Orphan Annie by a wolflike Daddy Warbucks. Yes, they had even stooped to that!

So Nick Carter, aka Killmaster - a man who would pursue, avenge and destroy - is mighty pissed off, and he sets off to Budapest. But before he can go behind the iron curtain, he needs to make a stop-over in London to do some investigation and prepare his plan. This is cool because I don't like the usual excessive globetrotting in these man adventure/spy novels. Here we simply go to England and Hungary (not counting Vietnam from where he had just returned before being called on this 'porn' mission). Anyway, the London episode is pretty cool and surprisingly non-violent as he only leaves a single fresh corpse behind him. A fat fucking German pimp for whom we don't feel sorry about! And the stage is now ready for some serious action.

He chuckled to himself now. The worst was over - the tension of waiting. Now it would begin. This was what he had been born for, no matter how much he told himself he hated it. Action! Now, Killmaster was at work, one man on his own with only his hands and a few primitive weapons. But they would be enough.

We are already on page 100 now, and at this point, Mr Stokes probably realised he was approaching his word count too fast, so he just wrapped it up. Action is not even broken into decent chapters. If I remember correctly, a single chapter towards the end covers Killmaster's capture, torture, escape and (of course) killing a bunch of the bad guys along the way. Furious stuff. My little objection to it would be that we don't really get to know the bad guys, not even how high they are in their corrupted and immoral hierarchy. Not that I cared that much for a detailed characterisation but at least crazy (and tragic) Mona would deserve an additional paragraph or two.

But it's still great fun. The plot is just crazy enough, action is balanced perfectly with some brain/leg work, sex descriptions are unforgettable. The front cover blurb from Buffalo News claims that "Nick Carter out-bonds James Bond!" but I would be a bit careful with such a statement. The thing is that not everything goes according to Killmaster's plans. In fact, more often than not, his plans go to shit - he gets stuck in London, almost abandoning the whole operation, after spending a million bucks on saving some girls, their cover gets blown after one hour, Pam gets abducted, and Nick himself is caught like an amateur when tailing some bad guys.

It could use a bit of a dialogue rewrite and a few more badass one-liners, but nevertheless, it's pretty cool. I'll definitely check out more of the Lee Stokes' Nick Carter!

Hero:
Nick Carter, senior-ranking Killmaster for AXE, and it was he, as much as any single man alive, who had thus far managed to keep the planet in one piece.

He probably was the best agent in the world. He was even better when goaded by the cold anger.
[Even better than the best?!?]

Along with the wolf and tiger, Nick Carter also possessed a fair share of bloodhound.

...has extraperipheral vision - it saved his life more than once.
...drinks coffee as black as Satan's dreams.
...is oriented as well as a compass
...can stay under water for over four minutes

Body count:
8 (one of the main henchmen Kojak with Jekyll/Hide kind of split personalities/identities is taken into account only once)

He kept his promise not to spare her. He had long been a devotee of yoga and his old guru had taught him many tricks, some of them sexual. So Nick, who was by nature a highly sexed man, had learned how to add tremendous endurance and iron discipline to an already bursting vitality.

Florence Vorhees learned about men that night. The first thing she learned was that she had never known a real man before, in spite of a record of promiscuity that would shocked her parents to death.
After a time it began to be too much, yet she kept her bargain and did not scream for mercy. She knew she would not get it. And she did not really want it.

"Darling, I think I'm in love with you. And that does make me a fool, doesn't it?"
...
Nick kissed her, then pulled the robe around her and fastened it. "You are not only a terrible brute," she whispered, "but you are also inhuman. Where do you get such self-control?"
"Later," said Nick. "Later, I'll show you something about self-control."

Her face filled the screen. She was a beautiful woman. Or would have been, in repose. On the screen now, she looked like Medusa gone mad.

Blackouts:
Yes, but not much to write about - he simply gets hit in the back of the head with the butt of a Tommy gun and then the chapter ends.

Cover:
Okay, but not nearly sexy enough! The girl lying on the sofa looks really hot, but most of the space is covered with text...

Cool lines:
[on the train from Vienna to Budapest]
At Nick's laugh, someone several seats ahead had turned to stare at him. They were about to enter Hungary, and that was no laughing matter.

This character, Nick told himself, is a real character![The Coolest!]
Posted by Jure P. at 11:47 PM