Made in Miami aka Lust is a Woman (Charles Willeford, 1958) 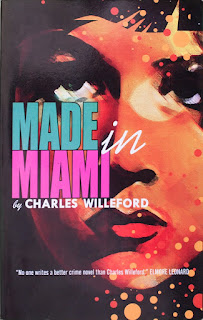 Boy meets girl. And falls for her big time. Which is unfortunate since she's already in love with herself. But this won't be Ralph's biggest problem. The thing is that Maria is not the smartest girl on this planet, and she doesn't exactly think twice before deciding to progress her current career as an NYC secretary into a more lucrative one as a Miami prostitute. Drama ensues.

Loads of drama, way too much in my opinion. Not that I have much against the genre and have, in fact, really enjoyed Willeford's early non-crime novels Pick-Up and High Priest of California. Both of them excellent character studies written in his distinguished style. But this one is simply extraordinarily plain. Not good, not bad, just... well, it's just ordinary. It never really takes off and grabs you. Maria and McKay are characterised decently, but our hero is pretty dull and (probably intentionally) pathetic. The third-person narration alternates between Ralph and Maria slows down the pace and takes away the suspense. Dialogues are somewhat corny, and let's not forget that the villain's henchman is called Tarzan. I kid you fucking not!

I don't know. I must have missed something or misinterpreted the whole thing. Was this novel Willeford's way of saying fuck you to America 50s conformity, consumerism, materialism, conservatism... Or is it about a young artist going (literally) crazy in this surreal environment? I couldn't say, but I did remind myself again to finally read his biography, where I'll probably find the answer.

Hero:
Art student Ralph, working in Miami over summertime as a bellboy.

Body count:
"These aren't dead people," Ralph said quietly. "They can't be. This one is Gila monster, that one is an alligator. The brown one inside the door is a toad, and she - she's a black widow spider."

Dames:
Maria stepped in close to the full-length mirror reflection, pressed her body against it, and kissed her bright red mouth against itself.
"I love you," she said. She really meant it.

"Will you be all right?"
"Sure. And thanks loads, Helen."
"I'll see you out in the arena in a few minutes. Just let that blank mind of yours stay blank."
"That's easy for me - I'm pretty dumb anyway."
"That goes for all of us, sweetie."

Blackouts:
Poor Ralph tries to storm into pimp's house to rescue his darling, but he gets knocked off right away:

A searing white light flashed inside his head, his knees buckled and, as he fell forward, the fingernails of his lifeless hand made a faint scratching noise as they raked the wooden door.

Title:
Not sure why the publisher decided to change the original title since this story could have happened in any big city. Lust is a Woman sounds way cooler, and it's also more accurate.

Cover:
Don't really like it. Looks a bit plain and too much like some psychedelic 60s novel cover or movie poster. By Olva design.

Notable cover blurbs:
The usual one by Elmore Leonard (and one that got me hooked on Willeford btw): "No one writes a better crime novel than Charles Willeford".

I agree, but unfortunately, this one hardly classifies as a crime novel...