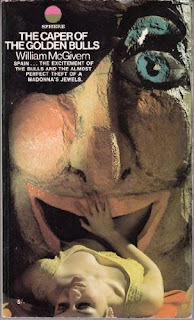 We all know about the Spanish fiesta and people "running the bulls". But I'll bet you didn't know that this insanity runs for three days (at least the one in Pamplona does) and that each morning at six o'clock, "race" starts with a couple of explosions detonated at the nearby river. The first one signals the runners that bulls had left the corral, and the next one informs them to better move their asses since bulls had formed something called encierro and are running towards them.

Our hero Peter did his homework, and he knows all about these things. And how can he not since he used to be a legendary thief nicknamed Black Dove, famous for masterminding capers? Good old black dove is now a restaurant owner but is forced out of retirement by his ex-associate Angela, who blackmails him into planning and executing the "one last job": stealing the priceless jewels from the bank located in the middle of the city of Pamplona! It's a monumental task, but he gets a tantalizingly amorphous idea and comes up with a plan that essentially involves blasting into the bank's vault with explosions carefully timed to coincide with the ones used in the ceremony.

Which makes sense, right? I mean, a drunken mob of several thousand can never tell the difference between the explosions that were set a few hundred meters (or more) apart. And both police and bank security staff are too stupid and incompetent to check the bank's premises every once in a while. But anyways, Peter seems to be so enthusiastic about this whole silly folklore that he even incorporates cabezudo into his plan. Cabezudos are, of course, those giant costumed figures with creepy faces, and master Peter gets one made to help him make a loot hand-over., Because you see, instead of taking a loot with him and handing it over to Angela later, it's much more convenient and risk-free to hand a bag full of diamonds to a giant costumed figure (with a creepy face) passing the bank's entrance precisely at the same time when the job is finished.

Do I need to go on? Actually, I think I do because it wouldn't be fair to finish this text without mentioning Peter's fiancee Grace, who herself used to be some sort of an uber thief (her nick was Black Diamond). Their romance scores the perfect 10 on a corny-meter (they keep calling each other "dear" and "darling") which is terrible enough, but the really irritating stuff is 100+ pages where she doesn't waste a moment to annoy him to either abandon the whole thing or let her help him. And it typically goes like this:

Hero:
Peter Churchman, ex-thief now restaurant owner. It's not explicitly stated, but he took his last name after accidentally bombing a cathedral in Manchester during his WW2 days. So besides being an over-complicating thief, he's not much of a navigator either...

There's also bitchy blackmailing Angela with an attitude, and I quite liked her, but unfortunately, asides from some poisonous remarks, she doesn't get much stage time.

Blackouts:
There is one, and it's not bad at all:

Good old darkness theme combined with a shuddering impotence. A bit crazy but nevertheless quite original. Also, a nice touch to throw in his black dove knick name.

Cover:
Cool and kind of sexy. To be honest, it's the main reason why I bought the book.

She said quietly: "This throws high and to the right. Francois, if you take another step towards me, I'll aim for the middle of your left thigh. I'm a good enough shot to put a very painful cloud over your technical qualifications to manhood." [Fatale]
Posted by Jure P. at 11:35 PM