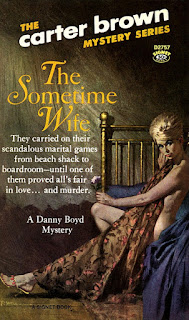 This one opens with a pretty silly bit of wisdom:

It then proceeds to the most narcissistic main protagonist introduction I can remember. Along with a witty response of which Oscar Wilde himself would be proud of:

"My name's Boyd," I told her. Then I gave her a look at my left profile, which is sheer perfection in itself, to bring a little glamour into her drab life. "Mr. Vanossa is expecting me."
"He's waiting in the library." She gave me a cold beady-eyed look. "And with a name like Boyd, you should be able to look people straight in the eye without twitching your head like that the whole time!"

So tone is set, and we now know better than to expect some ultra hard-boiled stuff. Our sleuth in this one is Danny Boyd, and he is hired by some extravagant (sort of) upper-middle-class (kind of) asshole to find his missing wife. And his motive for bringing her back is pretty cool: since she has access to the household money, he wants to bring her home in time to pay the bills at the end of the month.

Which is cool. I like plots driven by simple vehicles. Of course, no simple missing person case stays just that for a long time in any crime book. They sooner or later all turn into murders, and in this one, it is pretty soon - the body count meter starts rolling in the second chapter. From then on, the whole thing loses a bit of intensity. You see, Danny's MO is a bit strange: he keeps changing his clients, and every new one points him to a fresh suspect. So he basically wanders around, and instead of conducting some proper interviews, he keeps explaining what he knows to anyone willing to listen to him.

But since the man is a private detective, I still had a feeling that he knew what he was doing. I wasn't so sure once I came to this:

"Why are you taking me back there?"
"Because that's where it happened," I said. "Because whoever murdered Randolph wanted him dead, and you and Charlie didn't."
"What's that supposed to mean?" she snarled.
"I'm not too sure myself," I admitted. "That's why we're going back to the beach house to find out."

Whoever murdered Randolph wanted him dead!? I don't know how Bill Pronzini missed this one when he put together his two Gun in Cheek masterpieces.

Anyway, they reach the beach house where the whole cast is assembled, so the stage is ready for the final revelation. Don't like much that Agatha Christie type shit at all, and just when I started to yawn, it happened! The best part of the book by far! The whole whodunit revelation drama thing goes spectacularly wrong. Danny is so incompetent that he fails to notice that not just one, but two of the bad guys are carrying guns. So they disarm him and then even start to plot some shit to make our hero a fall guy. Not sure how intentionally funny this is supposed to be, but I loved it. This is what I call an original twist! And don't worry - Danny will shoot his way out (although it's not explained how he managed to obtain a gun) and save the day.

It's an easy read, and with only 120 pages, this is a perfect book to take on a plane. Lots of charming craziness in it, and I would almost call it cute, but there are few nasty (not needed at all) fags remarks, and our hero is kind of obnoxious every now and then. For fuck's sake - you don't get a girl drunk to fuck her!

"Oh no! This is hysterical, it really is! Don't tell me you're some kind of professional snooper, Boyd?"
"Private detective," I grunted.

And he has this weird thing about his profile. Seems he tries this "tick" to impress every woman he runs into, and (hardly surprising) it never actually works:

"My name's Boyd - Danny Boyd." I gave her the profile, right then left, and kind of slow so she'd have plenty of time to appreciate it.
"You have a stiff neck?" The caution in her voice warmed into sickening sympathy. "It's the humidity."

Dames:
Mrs Karen Vanossa: She had a kind of tempestuous beauty, with smouldering dark eyes colored to match her hair, a straight nose, and a firm but strongly sensual mouth.

Nina North: She was in her early twenties, I figured; a blue-eyed blonde with the kind of hungover lower lip which said she knew what she wanted, while the upper lip had a slightly hesitant look like it agreed about that okay but was still surprised.

Mrs Randolph: She also had that indefinable something that a good maitre d' can spot at fifty paces, that combination of breeding, social position, and - best of all - money.

And I should probably also mention Danny's red-headed, green-eyed secretary Fran Jordan. They have some sort of Velda/Hammer relationship with lots of sexual innuendo around them, but it's all pretty silly, and she doesn't contribute much to the story.

Blackouts:
Not sure. There's a cool scene when the blonde volcano (=Nina) storms into Danny's apartment screaming "Snake-in-the-Village!" at him:

"I'll kill you!" she announced passionately. "I'll beat your brains out and feed them to the ducks on Central Park Lane!" [Fatale]

She cracks him across the nose with her purse, and then he trips over the rug (because rather than paying attention to the blonde volcano, he instead chooses to admire its sexy body) and nosedives across the floor:

I had a vague impression of a million little white balls flying over my head, then her knee stuck me in the shoulder. The rest was a combined blur of sound and sight, something like Cape Kennedy in miniature.

So I'm not sure if this counts as a proper unconscious moment, but you'll agree that it's worth mentioning. Snakes in the Village, ducks in Central Park!

Title:
Don't really get it.

Edition:
New English Library, Four Square Books, 1966. Couldn't find a scan of this edition's cover online, and I'm too lazy to make one, so I've taken the Signet edition cover which is practically identical.

Cover:
It's got to be Nina since neither of the other two is blonde. And besides that, they both have small breasts (Karen's are high-peaked, and Mrs Randolph's are pointed with desire!).

The illustration is not credited, but it's pretty obvious its author is McGinnis. If nothing else, check out her unproportionally long left leg.

Cool lines:
Maybe it wasn't his fault, I thought generously; maybe he came from a long line of kissing cousins who just kept right on marrying each other and Charlie was the end product.

"Didn't I tell you Karen is a nympho?"
"Not in so many words," I muttered. "It doesn't faze you any?"
"I find it somewhat of a relief," he said casually. "I hate any form of physical exercise."

"You've found Frederic!" Jane's face was suddenly animated again. "That's wonderful! Where's he?"
"Down at the beach," I told her. "To be strictly accurate, he's down in the beach."[The Coolest!]
Posted by Jure P. at 10:44 PM