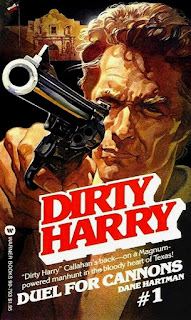 Do not read this. Here's all you need to know about it:

Chapter 1:
Texas sheriff Boris Tucker is killed in an amusement park in southern California while visiting it with his family. He was Harry Callahan's only friend. Because, you see:

Harry’s definition of a friend was someone he didn’t know from his immediate job that he was willing to go and see. Otherwise he kept up a friendly banter with the guys at work and let the girls come to him when they both found time.

Chapter 2:
We are in San Fran now. Tucker's death has been covered up as a suicide, but we know better. And so does Harry!

Chapter 3:
Before Harry can dedicate his attention full time to his late friend case, he needs to solve the current serial rapist/murder case he's been working on. Fortunately, the gods of incredible coincidences are good because he runs into the perpetrators while having dinner in some nightclub. Shoots three and captures one.

Then he immediately takes off to LA, where another corpse confirms that he's on the right track. He also gets involved in some ridiculous chase on the studio lot where they shoot a western movie.

Chapter 4:
It all added up to one thing; the hitman wanted Harry to come after him. Killing a friend, kidnapping a residential girl, leaving behind a stoolie-related clue, it was all part of his warped way to offend Callahan’s sensibilities.

Huh? Dirty Harry's sensibilities? At least his superiors have some sense left:

That sort of personalized logic fell on deaf ears. Neither Bressler nor his superiors could be convinced that Harry had a case.
Instead, Bressler was convinced Harry was working too hard that he was having paranoid delusions. He suggested Harry take a little time off.

Harry agreed. On his own time and with his own money, the cop reserved a ticket to San Antonio, Texas.

Upon his arrival in San Antonio, Harry's met by some street toughs and dirty cops. Also, the taxi drivers act very unfriendlily, so:

Harry had figured that a powerful politico was behind it all along. Now, however, Harry had to amend his reasoning. Anyone powerful enough to mobilize the police, the street gangs, the redcaps, and the cabbies went beyond area politics. Harry admitted to himself that he was dealing with a power beyond that. A power of money. A power of business.

We learn that the villain is a "wetback made good" (wetbacks are Mexican immigrants), Edd Villaveda aka H.A. Striker and that his henchman is some John Wayne obsessed psycho called Sweetboy Williams. We also get to know the good guy: Peter C. Nash, one of the few remaining good cops in San Antonio. Nash asks Harry to be his enforcer. Harry reluctantly agrees.

Chapter 5:
Not very eventful. Harry breaks up a dirty cops payoff deal. Also, a few cracks begin to show in Striker/Willams relationship, and the former one decides to terminate the latter one's employment. So there's a glimmer of hope that this will take some detour from the horribly formulaic direction it has taken.

Chapter 6:
Harry's second assignment as an enforcer. It goes wrong, and he's arrested. But gods of police stupidity (Strughold is so sure of himself that he leaves .44 Magnum lying next to Harry) are kind to him, and he manages to escape. Riverboat chase follows, and Harry again manages to outsmart and outmanoeuvre his adversaries. The chapter is concluded simply with: It wasn’t easy, but he did it anyway.

Chapter 7:
It opens with Harry being in the late Tucker's now empty house,  and the author doesn't even attempt to explain how he got there unnoticed. All wet with his clothes torn, wounded leg and - last but not least - by being fucking handcuffed!? I guess it wasn't easy, but he did it anyway...

Anyways, now our main man is really pissed off:

Harry’s depression was displaced by dark anger; the kind Harry used to fuel his life. It was a quiet, painless rage at all the injustices of civilization rolled together. It was a dark sense of realism. A feeling of reckless capability. Harry knew he had to do something.

The game was over, the playing had stopped, no more fooling around. Dirty Harry was taking over now.

He then calls Striker, and they arrange a time and place for the next shoot-out. Their conversation concludes by them both agreeing on Harry's mental state:

The shoot-out follows in which "it was every bullet for itself", and Harry kills a bunch of bad guys, but unfortunately, this is still not a final act. We need to keep enduring this nonsense.

Chapter 8:
Harry fucks Peter's wife Carol. Very unexpected and a bit sneaky, too, since Peter is still alive! And check out his pathetic rationalisation:

Then he manages to hack Peter's home computer by guessing the password (it is ".44 Magnum") and sets off to another shoot-out.

Although he tried not to, he couldn’t help realizing that this was the biggest fight he had gotten involved with since World War II.
...
They had everything. As Harry threw open his door and dropped below the top of the sunken level, he saw AR-15 Sporters designed from the Colt M16, Ruger Mini-14, .223 carbines with twenty-round box magazines, thirteen-round, 9mm automatics, army forty-fives, and shotguns of all types.

Striker’s head blew apart like a flower blossoming. The force of two .44 bullets burrowing into his skull at once all but decapitated him. Literal gouts of blood erupted from his neck like a scarlet fountain. Both men had to move back to avoid bathing in it.

Chapter 10:
By now, everyone's dead except Williams. He stages the one-on-one standoff with Harry in Alamo (ahem):

And you do know who will come alive out of it, right?

I could go on about why I think it's terrible, but the main reason is that it is simply fucking boring.

Hero:
Inspector Harry Callahan - No, they didn’t call him Dirty Harry for nothing.

Not counting a poor sucker on whose head Harry throws a beer keg (with a noise that was reminiscent of the sound the gong made at the beginning of a J. Arthur Rank film).

Four cops go on Williams's account (Williams in action was astonishing), and there's probably another half dozen more killed by him in the last shoot-out (since he was doing the same thing as Harry). Also, not counting an unspecified number of explosion victims in that shoot-out.

Blackouts:
Not sure if it counts, but there's a pretty (unintentionally?) comic scene in which Harry tries to set himself free of the handcuffs. You see, the problem is that his dear Magnum's barrel is too long to simply shot the chain off, so instead, he unsuccessfully tries a bunch of different techniques and one that involves a door, some bolt and doors ends up like this:

His skull slapped the bright floor tile, sending a starblaze across his eyes. He stared at the multicolored firework display of his mind while cringing on the floor. When his vision cleared, he was lying with his legs almost in the lotus position. He sat up without moving his legs. His vision clouded again and a little knife stabbed his brain a couple of times, but then the pain and the purple haze went away.

Cover:
Clint with his favourite toy

Cool lines:
Shannon didn't need much convincing. For a homicide detective, his demeanor was as bland as his face was handsome.

It was a beautiful weapon, which Harry knew how to use. Once some people knew how to ride a bike, they could ride any make or model. So it was with Harry and his handgun.[The Coolest!]