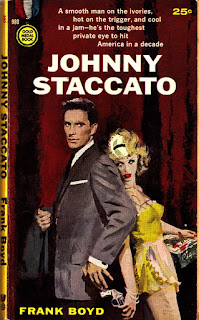 Damsel in distress saved by the knight in shining armour - pretty typical and formulaic P.I. pulp story. Slightly below average, to be honest.

The first thing that didn't seem right was a pretty lame motive for the initial killing. Doubtless, Les was an ultra-mega asshole and probably did deserve what he got... but is it possible that radio DJ in the early 60s would be such an influential figure in show-business that he could (and this guy actually did) make or break the careers of singers? I doubt it, even though he was the nation's number-one disc jockey.

The story is a bit flat. Although there is some action and Johnny tries hard to make something happen, everything is centred around a handful of suspects who - by some weird coincidence - had all visited our unfortunate DJ an hour or so before he was killed. Busy guy he was indeed.

The last little problem I had was the protagonist. Not that the author isn't trying, but Johnny simply doesn't come across as a likeable guy. He's full of himself, a macho guy (he gets laid twice) with a near-zero sense of humour (still he keeps grinning to everyone after delivering his "witty" one-liners) and some kind of a wanna-be artist (he plays the piano in a night club) with a sensitive soul.

But more importantly - he's not much of a detective either (he has hunches, and stuff is bugging him all the time), so it is pretty surprising when NYPD and DA decide to hand him over the case for 48 hours. Johnny's plan? Believe it or not, here it is:

“So now I take the forty-eight hours you've given me and I try to retrace my steps to see if I can pick up what it is that's bugging me.”

But it's still okay. I quite liked it. There's a nostalgic feel of the 30s and 40s, and in that sense, it works great. Straight-forward plotting with clues leading our hero from point A to B and finishing in a staged round-up of all the suspects and (not very) surprising revealing twist. Dialogues are pretty weak, but slang is cool, and some archaic expressions left me laughing out loud.

Hero:
Johnny Staccato P.I. - A smooth man on the ivories, hot on the trigger, and cool in a jam—he's the toughest private eye to hit America in a decade.

It took me some time to decipher that "ivories" bit (remember - he's a pianist). But finally managed to do it with a bit of help from the dictionary.

As he walked past, little groups on the sidewalk in front of some of the places parted for him silently, from the doorways of others came a word of greeting. Some he returned, some he shrugged off. There was a lot to be desired, but in the last analysis, it was the Village. And to Staccato, the Village was home.
Body count:  3

Object of desire:
Sex for Johnny and Les, fame and money for Shelley and Delia, Johnny for Gabby, money for Mr Seymour

She was tall, voluptuously built. Her blue-white hair complemented the deep tan of her face and bare shoulders. She wore a daringly decollete white satin gown that clung to the generous curves and seemed to be having difficulty restraining full, thrusting breasts. A small waist hinted at full hips and long legs concealed by the fullness of her skirt. Her mouth was a vivid, moist crimson slash in the cocoa color of her face.

Gabby swivel-hipped across the floor, the abbreviated skirt giving full play to her long shapely legs; the sheer blouse giving ample evidence that the magnificence of her facade needed no artificial support.

She was short, but the sloppily tied kimono couldn't conceal the fact that her breasts were full, her hips well rounded.

Blackouts:
Two of them. The first one is pretty plain with an evergreen black pool and exploding lights motives:

He never saw the blow that felled him. There was a whooshing sound, and lights exploded in the back of his head. He went to his knees, shook his head groggily in a desperate effort to dispel the black pool that was threatening to engulf him. A puddle of yellow light spilled onto the bedroom floor from the living room beyond. In it, he had a momentary impression of a man's black loafers with ornamental tassels. Before he could see more, the second blow slammed his face into the floor.

But the second one is a bit better. I liked that insect thing:

There was another roar from across the street. An insect stung Staccato on the side of the head. He heard the roar of thunder and his head started to spin. He was dimly aware of the sound of footsteps, a familiar voice that seemed miles away. He tried to focus his eyes on the doorway from which the shots had come, found his gun too heavy to lift. It seemed to drag him down. He was unaware that his face had hit the pavement.


Cool lines:
[after having sex with Gabby]
"How do you feel, Johnny?" the redhead wanted to know.
"Like I wrestled an octopus. And lost."

“I heard what he said,” Waldo wagged his head. “I also heard they're saying they're going to shoot a man to the moon. That don't mean they know what they're talking about.”
Posted by Jure P. at 12:19 AM