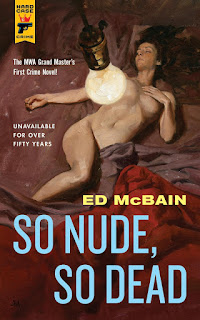 Wrong-place-at-the-wrong-time mystery. Of the amnesiac-awakened-by-the-corpse sub-genre. With a touch of a particular flavour because our hero is a junkie in this one. Which is cool - I prefer that the leading character in this kind of average-guy-turns-amateur-detective type be some sort of society reject rather than the usual doctor, school teacher, priest, etc.

It works well for a while. But then it slowly drifts into unreal or even surreal. Stuff like our poor Ray being totally strung out on heroin disguising himself by painting his hair with shoe polish (!?) and then impersonating a police inspector (he is only 26 btw) to interrogate a husband of a woman he's wanted for the murder of. Sure enough, his pathetic "cover" gets blown, but that doesn't discourage him. He goes straight to the club where he picked up the victim the night before and starts interviewing the barman. In the middle of this charade, a beautiful woman approaches him and takes him to her luxurious home, where she tries to seduce him. Eventually (pretty soon, in fact), she will fuck him, but you could see the final 'surprise' twist miles away, couldn't you?

There's more of such stuff, and it's pointless to go through the entire list. Let's just say it culminates on the third day of his cold turkey. Instead of banging his head against the wall of some cheap Harlem hotel and slicing himself with razors, Rey is still vital enough to escape from cops by running eleven floors up the staircase (beating and disarming one cop in the process) and then jumping to several rooftops to complete his escape.

During all this time, his investigation doesn't progress much, and he himself resignedly concludes towards the end that:

"It's one hell of a rat race, " he went on. "There are so many loose ends, so many blind alleys. I keep asking people questions, but I'm not sure I'm asking the right ones - and I'm not sure the answers mean anything. All I know is that I've got to find the real answer before it's too late."

So the whole thing is a bit amateurish. But it has some nice touches too. I liked the idea of running against the clock, which is simply trying to stay sane without a fix in Ray's case. And his character is superbly developed. At first, I found flashbacks to his past distracting, but they don't really slow down the pace. And they do help us understand our hero and make him human, so we don't judge him too hard and simply feel sorry for him. For fuck's sake, in a city as huge as New York, he doesn't have a single friend (not even among junkies), and he calls his father when he gets into this mess.

The plot is okay, and its development becomes quite enjoyable once you stop paying too much attention to the story holes (like where are the cops?!?), loose ends and coincidences. The final whodunit is decent, although far from shocking. All in all, it's good, honest and unpretentious writing without moralising or preaching on the complex subject of drug addiction. I imagine it was pretty ground-breaking 60 years ago.

3.5/5 (adding an extra half point for the included excellent short story Die Hard)

The second one is pretty funny:

There was a neat little hole right between his eyes, and it dribbled blood down along the side of his nose and over his mouth.
Ray stared at the drummer.
"Massine? Mass-"
He was dead.

Well, people with little holes between their eyes tend to be dead. Elementary, Watson...

Object of desire:
The answer seemed logical and simple to him: find that bastard. Find him, and the pressure would be off. The cops would have a new sucker to toy with. And then Ray Stone could contact Louie or any other damned pusher in the city.

Dames:
Besides Eileen (lady on the cover), there is Barbara 'Barbs' Cole - "The warmest pair of brown eyes he'd ever seen" and (unfortunately too) briefly Chinese/Irish cutie Rusty O'Donnell ("They bill her as an artistic dancer. That means strip artist in English.")

Blackouts:
Yes, he blacks out during the beatings that bad guys give him:

His eyes opened as he saw the gun butt reaching out for him. There was an explosion alongside his left ear, a fiery display of screaming stars. He struggled to keep his head up, felt the next solid blow crush into the base of his skull. He stopped struggling then.

Title:
Pretty cool sounding, but not very profound - Eileen was simply nude when he found her dead. But I think it's still better than the original The Evil Sleep.

Cover:
Love it! I think it's so good it qualifies for a painting and not "just" an illustration. Great perspective from above, and the light bulb (although it could be placed a bit over to the left) casts cool shadows and creates nice shades of red and scarlet. Very noir-ish, very stylish.  But not 100% accurate - murdered girl is blonde, her arm is supposed to have lots of needle marks, and there should be two bullet holes in her belly.

By Gregory Manchess. Who btw ought to do some work on his website.

Cool lines:
Can't think of any really memorable in So Nude, So Dead, but I found this one from Die Hard pretty funny: