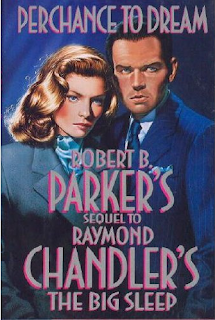 Style is okay, and there are a few moments of brilliance (see hero and cool lines sections). However, sometimes I thought that Parker tried too hard emulating Chandler and came up with some genuinely corny dialogue.

The problem is the story. Or lack of it... Marlowe basically breaks the case and finds the bad guys after the first ten chapters (and btw, they are pretty short in this one). And then, for some reason, he keeps calling Vivian, and she keeps whining, and the damn thing doesn't move anywhere. So Parker throws in some Chinatown-like water rights conspiracy nonsense that just doesn't make much sense either.

Simply not good, but it is at least bearable. Unlike that abomination of Black-Eyed Blonde published last year.

Hero:
"You're a private detective," he said. He had one of those Hollywood elocution voices which has no real accent but sounds nearly British, especially if you haven't heard a real one. He sounded like a guy that recited bad poems on the radio.
"When I'm not polishing my yacht," I said.

Body count:
4, not counting the unfortunate kitten thrown out the open porthole into the sea by that asshole Simpson.

Dames:
Vivian, still beautiful with eyes nearly coal black and full of heat and a full lower lip that seemed specifically meant to be nibbled on. And still tough:

"I'm not as tough as I look, Marlowe," she said
"If you were as tough as you look", I said, "you'd probably have to be licensed." [Fatale]

Blackouts:
Yes, no less than three of them:

...something erupted against the side of my head and the lights coalesced into a brilliant starburst and then blackness into which I slid as peacefully as a drunken seal.

Huh, drunken seal? The second one lacks this kind of imagination and is more or less limited to the use of a comparative (or is it superlative?) of the adjective red:

I couldn't breathe. The reddish haze got darker and redder and finally enveloped me and I plunged into it and disappeared.

The last one lacks any imagination at all. Pretty standard stuff:

Something hit the side of my head and I went back once again to a place I'd been spending too much time in.

Title:
According to Wikipedia, it's another euphemism for dead.

Cover:
She is definitely young Bacall, but the guy looks more like the dude who played Eddie Mars in The Big Sleep. Is it possible that the illustrator was given the wrong film still?