Pearls are a Nuisance (Raymond Chandler, 1950) 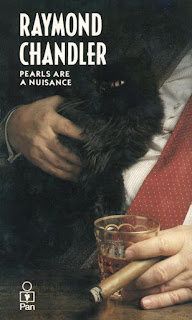 Checked this one out while reading's Chandler's letters and watching again the brilliant HBO series with Powers Booth. It's a collection of three short stories and a seminal essay The Simple Art of Murder.

Not bad, but quite forgettable cosy buddy-buddy nonsense. Of interest probably only to Chandler's scholars.

Opens with Marlowe testifying against some badass mobster. Besides the killing he's accused of, this guy Manny also seems to have a history of shady dealings with "a big politico, a fixer". Some influential people would prefer Marlowe to stay away from the Grand Jury, and the DA advises him to watch his step. Our main man responds simply by saying "sure" and goes back to his office, where he's met by a friend who hires his services as a bodyguard for the forthcoming night.

So by the end of the first chapter, the setup is complete. And the two plots merge pretty soon, which is good - I don't like those predictable endings with "surprising" revealings of "unrelated" sub-plots. What follows is a standard classical PI story with gamblers, corrupt politicians, tough guys and amoral dames.

Royalty from the title is King Leopardi (what a great name!), a jazz bandleader whose wild party is broken up by our hero Steve Grayce, a hotel detective. King has an attitude that matches his "blue" blood and gives plenty of it to Steve:

"Leopardi does what he likes, where he likes, when he likes. Nobody's stopped him yet, gumshoe. Take the air."
...
"I never did like house peepers," he sneered. "They smell like public toilets."

He doesn't stop at verbal abuse. The asshole even takes a shot at our hero! So no wonder Steve throws him out of the hotel. But instead of management's gratitude, he gets canned for mistreating VIP guests. Jobless now, he decides to join the ranks of private investigators, and his first assignment is offered to him practically by itself - when cleaning the room after his fight with Leopardi, he finds a blackmailer note in King's wastebasket.

It does take its time to get things going, but I really liked this intro. The story then progresses nicely, some colourful characters are introduced (with more crazy names like Dolores Chiozza and Jumbo Walters ), and everything finishes with an excellent, very surprising ending centred around a family tragedy. I could sense it coming with that old broken couple and the blind guy crying. The sad world indeed is the world of Raymond Chandler, but you enjoy every moment of it.

Hero:
We all know everything about Marlowe, but who is Steve Grayce, the (ex) hotel detective?

Steve frowned at the gun and didn't move. The big man looked him over. "You're tough," he said. "I been in the ring long enough to size up a guy's meat. You're plenty hard, boy. But you ain't as hard as lead. Talk it up fast."

Body count:
None in Perils, 8 in Finger Man (half of them are related to the Manny Tinnen affair) and 7 in King

Blackouts:
There's a pretty funny one in Perils:

I bent over and took hold of the room with both hands and spun it. When I had it nicely spinning I gave it a full swing and hit myself on the back of the head with the floor. This made me lose my balance temporarily and while I was thinking about how to regain it a wet towel began to slap at my face and I opened my eyes.

And a more proper one in Finger Man when Marlowe gets "coshed" from behind:

Then he dropped the cigarette and stopped on it and a quick, light step made faint noise behind me. I was far too late turning.
Something swished and I went out like a light.

Notable cover blurbs:
This one, coming from Daily Telegraph, is a bit old fashioned but still pretty cool:
"...As tense as a tiger springing into action."

Cool lines:
Obviously, since Chandler and Hammett invented the hard-boiled language, there's no shortage of cool lines and below are just a few:

He had beautiful teeth, but they hadn't grown in his mouth.[The Coolest!]

He took out a leather keyholder and studied the lock of the door. It looked as if it would listen to reason.

She had a mud-coloured face, stringy hair, grey cotton stockings - everything a Bunker Hill landlady should have. She looked at Steve with the interested eye of a dead goldfish.

But super cool stuff comes from The Simple Art of Murder essay. The whole thing is available online here. I just pasted a small example of its brilliance:

There is plenty of that kind of social and emotional hypocrisy around today. Add to it a liberal dose of intellectual pretentiousness and you get the tone of the book page in your daily paper and the earnest and fatuous atmosphere breathed by discussion groups in little clubs. These are the people who make bestsellers, which are promotional jobs based on a sort of indirect snob-appeal, carefully escorted by the trained seals of the critical fraternity, and lovingly tended and watered by certain much too powerful pressure groups whose business is selling books, although they would like you to think they are fostering culture. Just get a little behind in your payments and you will find out how idealistic they are.
Posted by Jure P. at 11:00 PM