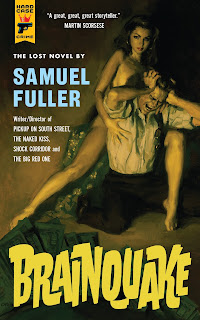 Paul Page is a bagman in New York who falls for a wrong woman. Together they steal money from his employers, go on the run and end up tragically in Paris. A bagman? Highly trained professional who transports dirty money for the organized crime.

And with such a killer opening line and Fuller and mobsters and anti-hero with his babe on the run... it simply got to be good, right? Well, not exactly. First part - the boy-meets-girl & money stuff in New York - is okay and it might even function if it wasn't so insanely blown out of proportions. Cartonish characters (like that priest hit-man dude) I can digest but carrying not just millions but (literally) billions of dollars in cash while being chased by (again-literally) pirates is just a bit too much.

And it should end in New York because the whole Paris thing (another 100+ pages) quickly turns into an incomprehensible mess. Plot falls apart and there are so many incredible coincidences (like protagonists keep bumping into each other all the time) that they cannot simple be coincidences. I kept thinking for some time that they were some kind of metaphors (that I just wasn't getting) or shit like that. But further and crazier it got the more convinced I was that Fuller simply wanted to finish the book and had ran out of ideas.

But interestingly enough, the megalomania and surreal world from the first part gives us one of the craziest and most memorable villains in the long history of villains. Chapter 16 describes a typical day in the office of Cornelius Hampshire - the most powerful man throughout the civilized and uncivilized world of crime. In a mere five pages Cornelius and his four lieutenants manage to coordinate crime all around the globe - stuff ranging from narcotics and banana republic revolutions to money laundry and high investment banking. They of course also briefly touch on the piracy situation in which our Paul is involved in. And we get to know the humane side of Cornelius because he seems to be a big baseball fan:

"Good. Michael, what's going on with Citra?"
"She's being executed Friday."
"Get our liaison to buy her freedom. Give him a million."
"He's being executed with her."
"Goddam it! She's the best distributor in Malaya."
"She was."
"What about Russia?"
"The ban on farms growing poppies shot opium prices sky high."
"Addicts'll pay the difference. Take advantage of the revolt of the ruble. And, oh yes, on the baseball scandal? Kill any bastard selling drugs to ballplayers. I love that game. Don't fuck around with baseball. Ever."

I know this is Fuller's last book and it's great that Hard Case Crime published it but it has to be said the whole thing is a bit weird.

Body count:
20 - including two cops in the final shoot-out (although there could be more) but excluding Eddie and Michelle. And I wouldn't give this duo much of survival chances because in the very last chapter they are spotted (another unbelievable coincidence btw) in Avoriaz by the hit-man Father Flanagan.


Title:
Paul suffers from some undefined brain disorder that he calls "Brainquake". It's not a tumor or anything else that modern medicine can deal with so I assume it must be another metaphor I have missed.

Cover:
Another cool one by Glen Orbik with Max Phillips designing the cover. And after visiting Phillips' website I finally realized that the man is not illustrator :) Need to check some of my old posts and fix artist's credits on them.

Notable cover blurbs:
None really notable. Maybe because all of them are written by film makers?