Nothing More Than Murder (Jim Thompson, 1949) 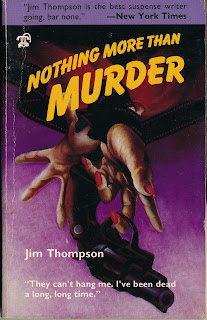 This one isn't interested much in the actual criminal act or the prior plotting leading to it. This is just as well since the bad guys' plan is pretty pathetic. Good old double indemnity insurance scam with a bit of a (silly) twist. The wife catches our hero Joe cheating, and then the trio together decides to resolve this unfortunate situation by faking her death and collecting the insurance money to pay her off so Joe and Carol can live and fuck happily ever after. And the silly twist? They manage to get the "replacement" body by simply placing an advert in a local newspaper seeking a woman that physically resembles Elizabeth (she would die in the fire burnt beyond the recognition, so her body/face isn't significant).

Of course, with such an amateurish (stupid?) plan, it is only a question of when and not if they will get caught. It's also a question of who will blow up the whole setup since Joe soon finds himself blackmailed by a couple of local scumbags, investigated by the insurance company PI. At the same time, his accomplice/lover gets increasingly distrustful (and unpredictable). And if all that wasn't bad enough, he's also in the middle of a fight against his movie theatre's (very hostile) takeover.

And this is where the novel's brilliance comes in. Joe is a bit like Sheriff Nick Corey from Pop. 1280 - a manipulator who schemes all the time to get his way out of the troubles. So instead of a classical whodunnit, the suspense here is about guessing how he'll manage to untangle the messy web he got himself caught in. And although he's a bit of an asshole (but then again, the whole cast consists of assholes), he's still likeable and even honest in his own way, so I must admit I was kind of cheering for him.

Excellent stuff, and even though this is very early Thompson (his first "proper" crime genre novel), it is put together masterfully. Snappy dialogues, superb characterisation of the main protagonist (I would dare say that others are neglected intentionally), great storytelling with some flashbacks thrown in and just enough psychological stuff to keep it interesting even though the plotting is not very strong. It simply works. Everything clicks as it should.

And cannot finish this writing without mentioning the small town mentality and seedy movie theatres and film distribution industry milieu into which the story is placed. Amusing stuff that provides a good atmosphere and gives the story a realistic and authentic tone. Too bad that "Glossary of exhibitor terms" is at the end and not at the beginning of the book. I was a bit confused at first when coming upon terms like "dark" (not in operation; a dark house), "product" (pictures) and "paper" (advertising matter). But it wasn't too distracting, and it eventually got cool once I got this slang.

Maybe a bit too light and naive for my taste  (I saw that ending twist coming way too soon), but it didn't really matter. Enjoyed it a lot.


Location:
Imaginary small-town of Stoneville. At least, I think it doesn't exist since I could not find one on Google maps that would be "an hour driving from the City" or "thirty miles from Wheat City".

Body count:
2, possibly another one since I'm not sure how to interpret "I caught him right in the act of slugging Jimmie Nedry".

Dames:
I'd thought she looked awkward and top-heavy, and, hell, I could see now that she didn't at all. Her breasts weren't too big. Jesus, her breasts!
She looked cute-mad and funny-sweet. She looked like she'd started somewhere and been mussed up along the way.
She was a honey. She was sugar and pie. She was a bitch. [Fatale]

Blackouts:
The whiskey never reached my mouth. I couldn't get it that high. It trickled out on my shirt front, and then the bottle dropped from my hand to the floor. And I followed it.

Title:
Cool sounding. It probably refers to a trivial and over-simplistic plan that our murderous trio puts together.

Cover:
Nice, old school type of illustration. Made by a guy named Kirwan, who apparently created covers for all of the Black Lizard's classics reissues. And they all look great!

Not that I disagree, but still, it seems strange that they would regard him as "writer going" seven years after his death.

Cool lines:
She smiled, kind of like an elevator boy smiles when you ask him if he has lots of ups and downs.
Posted by Jure P. at 8:51 PM