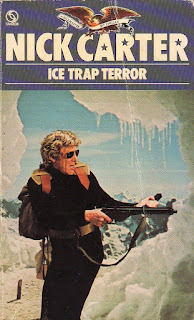 Came across this one in Bill Pronzini's fantastic Gun in Cheek. It was around the time when I finished The Mongol Mask, and since they are both driven by a similar bizarre "meteorological" plot vehicle, it seemed only natural to compare these two alternative masterpieces (as Pronzini would put it) and gauge them on the scale of ridiculous-meter. And besides, it's about time this blog gets a Nick Carter entry.

But without boring myself again, I can only report it is as bad as Mongol was. Similar kind of dull, humourless writing where bodies pile with lightning speed, and everything (including sex scenes) takes ages.

Until we reach the final shootout in the penultimate chapter. The mighty chapter thirteen!! Crazy stuff, impossible to describe how over the top that shit is. Instead, I'll take my time and re-type some of the best bits below. Sit down, relax and enjoy:

One bullet caught him in the throat as he began to yell and the other poked his eye out.
Bullet poking an eye out??

"There have been reports of a woman."
Zembla gave a derisive snort. "Leave it to Carter to have a girl along, treating this as if were a vacation at a sex club..."

Fast forward a couple of pages, and we find Zembla attempting to kill Carter and Tamara utilising one of the craziest killing methods I can remember of:

The copter banked slightly and came slithering toward us.
"That bastard! That sonofabitch! I raged. "He's going to drift overhead and pick us off like sitting ducks! Keep your head down, Tamara. Don't look."

Towards the end, Carter has no escape plan, but:

There wasn't any thought as to the odds of discovering a boat, or if we could find a way to run it; there had to be a boat available, if we were to survive. It was as simple as that.

There was a boat, a sleek and sassy thirty-foot craft, bobbing wildly at its lines like a maverick stallion straining in a chute.

The End. Brilliant, isn't it?


Location:
Hard to keep up, but I think Nick and Tamara fly to the following countries with her little Cessna: Nicaragua, Honduras, Costa Rica, Panama.

"My idea is merely to make a mountain. That is, simulate one with radio waves, projecting all the symptoms of a mountain into the air currents of the troposphere. That would have to be about fifteen thousand feet to insure snow. Nobody will see it, and a plane can fly right through it, but the weather will know it is there!"

Still confused? I cannot really explain something I don't understand fully myself, so I would suggest you check pages 35-38.

It was a face to remember. So was the rest of her, for that matter. Her body was everything a woman's body should be - taut-breasted beneath her checkered woolen shirt, and leggy down to her mid-calf boots. Her face was heart-shaped and matched her body's promise of tenderness and passion.

But make no mistake:

Tamara was tough, pragmatic, and courageous, and above all, nobody's fool.

Blackouts:
They should put Nick into one of those Duracell batteries commercials because he's indestructible. Shot and wounded twice, repeatedly beaten (including once getting kicked in his balls) and having sex (twice) while trying to save the world and not once he loses his senses. But at the end of that epic chapter #13, when the mission is accomplished, he finally gets his well-deserved blackout moment:

But as the yawning pit of unconsciousness closed over me, I looked up at the sky and smiled. The weather was changing again.

Cool lines:
Her round, high breasts were like frozen apples against my bare chest.[The Coolest!]
Posted by Jure P. at 11:56 PM