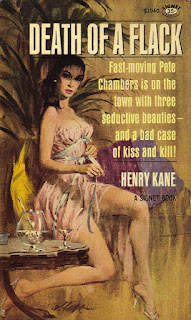 There are three beautiful women in this one, three cases of blackmail, and even three (!) private detectives somehow involved... but still plot is very simple and straightforward. Our hero doesn't really investigate in the traditional sense of conducting interviews, chasing leads, piecing pieces of evidence together, etc. Various clients simply hire him to do pretty trivial tasks (like blackmail money delivery), so he goes from a point A to B and C and, along the way, collects plenty of cash and a few fat checks. There is no action, not much of a mystery or drama, not much of anything.

Towards the end, this became clear to Mr Kane himself because he included this somehow apologetic (funny?) paragraph:

- a sizable sum in total aggregate of $7300, but if any of you, inspired by this reading, are overcome with the desire to rush into the business of private-eyeing, I must hasten to promulgate the harsh facts of the interminable succession of rank; blank days between bonanzas which flatten the average to exactly that - average. You want to make money? Invent a toilet paper with a new scent for each day of the week and sit back and wipe up the profits.

Hasten to promulgate the harsh facts of the interminable succession?

Anyway, this book's not bad at all, and some parts are actually hilarious (see cool lines), but it lacks any kind of a hard-boiled edge. Maybe because all the beautiful and wealthy people throw money (and sometimes themselves) to our PI, making his job trivial. And partly because he is not very likeable and/or interesting fella. He is a bit narcissistic too, and definitely a sexist asshole. There is a hard to digest scene in which he slaps Sherry twice simply because she's wouldn't fuck him. True, he doesn't feel exactly good about it afterwards, but his rationalising is really fucking weird. He somehow concludes that she's a lesbian ("I now knew she was evil") and asks himself a rhetorical question: "Did that lessen my desire for her?". This brings us to some really misogynistic shit:

I knew why I had hit her. A courting male knows, almost instinctively, the manner of approach to the female of his desire. Some need flowers, some need poems, some need music, some need attentions, some need surliness, some need silence, some need dominance - Sherry Greco needed a good belt in the jaw. I had struck her as part of my wooing act. I had enhanced her respect for me. I had begun to earn her.

Crazy stuff. I wish Kane would have dedicated some of this negative energy to improving the plot. It just leaves a dark spot on this otherwise entertaining little pulp.

"Now don't pretend to be a hipster with me, Mr. Chambers. I happen to know you for what you are - an incurable romantic, a Don Quixote in a custom-tailored suit, and essentially and forever, and admirably, a softie."

Object of desire:
800,000 dollars worth tiara fashioned in 1550 by Benvenuto Cellini, especially for Eleonora, Princess of the House of Medici.

Dames:
Three of them, introduced straight away, on the third page:

- the poetess, Miss Lori Gilmore (the jeweler's daughter), the inamorata, Miss Sophia Patri (the jeweler's latest sweetheart), the belly dancer, Miss Sherry Greco (my date) - were homogenous in aspects of beauty: they were all ravishingly attractive women, although each was of an entirely different mien... blonde, slender, sinuous, smoky-eyed, intense, reserved, and sullen... tall, red-haired, green-eyed, glistening-mouthed, and shaped with extravagant, bewitching, and always-exposed curves... a full ripe figure, tawny skin, and black smoldering eyes

He appeared to be regarding us with three eyes, two of which were glazed. The third was a round red hole just above the bridge of his nose. Parker went to him, went from him, reported: "Very dead."

Cool lines:
Pretty weak on dialogues, but Henry Kane is THE master of metaphors. Although I'm not sure I actually get half of these (and there are much more in the book), they are still unforgettable:

The drizzle had sundered as the hymen of a star-struck virgin upon the first suggestion of a skinny crooner.

A New Yorker has about as much use for an automobile in this city of car-crowded curbs and congested traffic as he might have for a chrome-adorned toboggan.

I had found him as reliable as rock, as solid as steel, as resourceful as a tiger on the prowl.

I was shuttling in and out of my apartment as though it were a bathroom and I was in the unfortunate piss press of chronic prostatitis.

The lady's  motives were as grossly apparent as the bulge in the tights of the male star of ballet.

That sat her back on her pretty ass for a moment but she came up swinging like a marijuana group at a progressive-jazz session.

Studded throughout the place, like sparse cloves in an insufficiently spiced ham, were other wan business executives morosely mending last night's sins.

My gastric juices jumped like a sensitive gal insensitively goosed.

The damned thing had more glow than an Irishman full of Scotch whiskey.

Her firm, young, pointed, pear-shaped breasts had nipples that stuck out like the spiteful tongues of spiteful children.