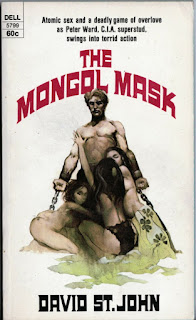 I liked House Dick a lot and was really looking forward to reading this one. The outrageously blatant and hilariously over the top Conan the Barbarian-like cover art (accompanied by "atomic sex" and "torrid action" slogans) promised a memorable experience. So I would check from time to time on eBay for a decent copy priced around 15 bucks and didn't hesitate one moment when one was finally listed.

Our spy hero Peter Ward is introduced through a recent assignment in which he rescues some political prisoner/informer in Spain (I think). On his return home, we learn more about him. The usual stuff - dead wife, alive and loving sister with a couple of kids who adore him etc. He also has a dog. Standard stuff, and a bit boring, to be honest. It lasts for about forty pages, and then he starts his mission in Hong Kong.

And this is where things slowly go to shit. The thing is that it's not really clear what the objective of his mission is supposed to be. Chinese are apparently trying to attack the Soviet Union (!?) with some badass missiles (even worse than nukes) that would, in turn, somehow fatally affect the USA (??). So he needs to go to this remote town close to the Mongolian border where the rocket launch pad is to check it out. Or something like that. After 100+ pages, he finally manages to get there and destroys one missile, but another is successfully launched (even though he blows up the whole complex).

And these 100+ pages are indeed painful reading. Every chapter gets more tedious (and unintentionally comedic) since nothing really happens during this odyssey. Or, to be more precise, nothing happens that would support the story coherently. The funny thing is that, after a while, even Peter himself - super spy as he is - loses track of time and is not sure how long it has been since the mission started.

So the sinister missile is off and on its way to hit an unknown target. Peter gets picked up by the rescue plane, safely returning to the Pentagon. One would think that this concludes his assignment, but several chapters are still left. Because we finally get to know what the conspiracy is all about based on the hard evidence (some soldier's personal diary) that he has brought back. And it's hilarious; check out the 'object of desire' section of the facts below.

And yet, the best is still to come. Peter is dispatched to Grenland together with a bunch of military and scientific personnel, where he - surprise, surprise - saves the world. And he will do that using the Prometheus:

"Want to tell me a little more?"
"Well, we've been working on this model as a substitute for ABM emplacements. Prometheus, we call it, and the ray diameter - one square centimeter -  radiates a pulse a hundred million times hotter than an equal area of the sun's surface. I - uh - I gather you're not a science man, so I'm putting this pretty basically."

Everything is so insane that it actually has a great potential to be some sort of a trashy masterpiece. But it's not. It's just simply and plainly bad. Written poorly, with no tension or suspense, very predictable, with pages and pages of dull descriptions without any dialogues.

Memorable only for its cover.

Location:
Spain, Pentagon, journey from Hong Kong to far inside China's inland, back to Washington, concludes in Grenland

Body count:
27 - assuming that the plane crew that Peter and Mei-tang shot down (with an old rifle and a Magnum gun!) consisted only of a pilot and gunman.

And not even counting the victims of Peter's sabotage. The exact number is never specified, but the Major that Peter interrogated said there were over 100 soldiers on-premises. And there was also a delegation of VIPs (six vehicles) present at the launch.

Object of desire:
Evil little yellow/red people want to melt both Polar caps, which would "result in catastrophic flooding of the earth's surface.... submerging such coastal cities as New York, Washington, San Francisco, New Orleans, to name a few... And that is what we face... we reasoned that since Communists China's industrial resources are located far inland, China's leadership could point to those peripheral losses (Shanghai, Canton and Tsingtao) as defence against charges o Chinese responsibility... the world's food supply would constrict, starvation would be the order of the day - in all countries except China where, knowing what to expect, they would increase their food supplies and perhaps have enough surplus to use in a new and horrible game of international blackmail: accept the overlordship of China, or starve."

Huh, "overlordship"? Even my spellchecker is lost with this one.

Dames:
Mei-tan - widow of an executed Chinese scientist. She soon succumbs to Peter's charms, and in no time, they start fucking. And although the cover promises "Atomic sex", all we get in this department is some pretty corny stuff: "He felt her hand touch his hair, stroking it gently... her tights touched his... he turned to feel her small nipples prick his chest... their bodies met... desire overcame fatigue... their bodies merged in the primal combat in which there is no victor and no vanquished."

Blackouts:
He glimpsed something moving with great speed, a grenade exploded in his skull... Then unbearable, enveloping pain smothered him completely.

Title:
Beats me. There's no mask, Mongolian or not, involved in this one.

Cover:
Crazy stuff (the middle one is giving him a blow job, isn't she?!), and it actually depicts the scene where Peter is taken prisoner by some Mongolian Amazons (ahem) who use him as their sex slave.

No illustration credits are given, but according to this super cool site, it was created by the legendary Jeffrey Catherine Jones.


Cool lines:
None really. Unless you find stuff like this amusing:

Who knows? he pondered. The decision might even have been made. Washington's made decisions before - maybe they've made one now. They didn't tell me to blow the dam and destroy the missiles I discovered. But they supplied the means.

And, btw, I didn't mistype. These kinds of switches from a third to first-person narration (and from past to present) are pretty frequent...
Posted by Jure P. at 1:29 AM