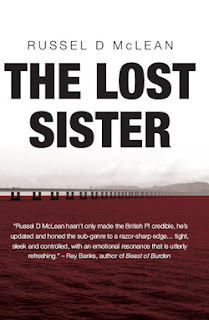 Hardly a crime/mystery novel, more like a family drama. Heavy one. God-daughter of the local mobster disappears and our hero gets involved in her search. With "gets involved", I'm being vague intentionally because I'm still not sure what the fuck his motive was. First, he's contacted/hired by the local newspaper, then cops ask him to be some sort of a counsellor (!?),  few chapters later, the girl's asshole godfather wants him on the case, and finally even some fellow private investigator (!!!) pays him 200 pounds to find this girl. Which gotta be some kind of precedence - I can think of another one where PI gets hired by another sleuth. Can you?

The investigation itself is weird as much as his motives are unclear. Basically, he only interviews three people and then (in a 30-page long scene!) that other PI more or less explains everything our main man McNee needs to know about the story. You know - stuff from the past that detectives are usually supposed to uncover themselves... But then again, this is not such a bad thing since otherwise, this book would probably be 1000 pages long instead of "just" 300.

Yes - 300 pages. It does take its time. Moves slowly, constantly going back into the past... with the body count counter remaining still... taking its time to tell the reader a thing or two about the local history... and architecture... and - worst of all! - with our hero constantly whining and feeling sorry for himself.

Surprisingly it still works pretty well. I wouldn't say it is a page-turner, but it's definitely not dull. It is skillfully written, and although the pace is slow, it has a nice rhythm. Dialogues are smart, and they contain a decent dosage of the local slang (although it rarely goes beyond the usual Scottish wee, lass, aye, shite stuff). For my taste, there's a bit too much of the psychological/philosophical crap, but at the same time, I didn't find it pretensions at all. And to be (a wee) pretentious myself, I'll conclude by saying that McLean maybe tried too hard to create something extraordinary and lost focus on the story along the way.

Interesting and honest writing but simply not hard-boiled enough for me.

Dames:
Mary Furst is 14 years old, and both sisters are a mess, so none of them exactly qualifies as "dame"

Cover:
Looks like a fucking computer manual. When I see such plain covers, I often think of authors and how shitty they must feel about their publishers investing fuck all in the cover art. Long live the Hard Case Crime!