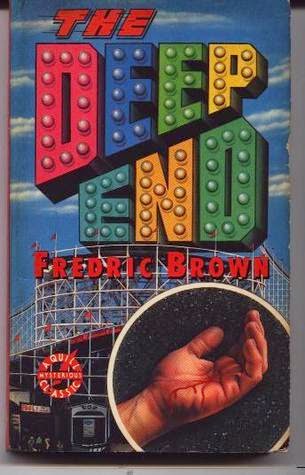 A high-school kid is killed in an amusement park by a roller-coaster train during its morning test run, and veteran newspaperman Sam Evans has a hunch that it was not an accident. To convince himself, he goes to this "accident" scene and stands beside the track while the train is approaching. It (of course) makes such a noise that even earth starts to ramble, and since unfortunate Jimmy wasn't deaf, this can only mean that he had been pushed under the wheels. The stolen wallet of an all American football star student was found in the victim's pocket, so ergo! its owner is a killer. Investigating journalism at its best!

In fact, this guy is a serial killer! After some digging up, it turns out that there were four accidents/murders in his high school recently, and a few hobos were found dead in the shady part of the town (jungles) where our psychopath likes to take night walks. It seems like his ill mental state originates from his infant years when he killed his sister.

Some of these findings/conclusions come from Sam's old flame Nina into whom he accidentally bumps. And she proves to be an invaluable source of information because (a) Nina is a social worker assigned to help the victim's family, (b) she's also a teacher in the high school that the killer attends and finally, (c) she used to fuck the killer. There are other hard to swallow coincidences, like Sam's family doctor is the same one who tried to revive the killer's little sister ten years ago.

In short - it's a bit of a mess. Not very believable and pretty dull, to be honest. Written in a first-person narration which I usually like, but in this one, lots of time is spent on the hero's inner thoughts (even dreams) and "thinking out loud" kind of rationalising and deduction. Which is pretty shitty because Sam is not much of an investigator (asshole even reads Nina's private diary!). Instead of doing his job correctly, he spends most of the time fucking Nina and whining about his failing marriage. To be honest, that former part was kind of amusing and probably pretty daring for the 50s. I mean, they are both so horny they don't even mind when she gets a period (she simply dismiss it by "I'm not very sick, darling; it was mostly a false alarm.")

Initially promising with that identity switch trick, it unfortunately never really takes off.

Body count:
2 for sure, probably much more, but it's never clarified which accidents were actual killings.

Dames:
Sam's high-school sweetheart Nina is quite a tragic figure. So excited and happy to meet Sam again that she immediately jumps in bed with him. They soon start calling each other "darling", but then Sam betrays her confidence by reading her private diary.

Title:
A bit of psychoanalytical crap from Sam's dream: "I was standing at the deep end, just a foot or so from the edge."

Am I missing something? Do these names reference some real people or literally characters?
Posted by Jure P. at 12:50 AM