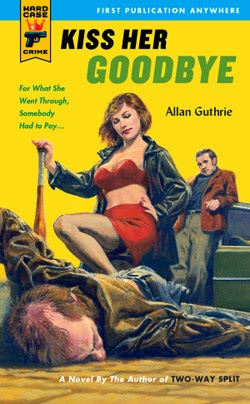 "Framed man on the run proving his innocence" type of story. And this time (thankfully!), our hero is not some clueless doctor or school teacher. Joe Hope is a badass muscle man working for his best friend, who also happens to be a nasty loan shark. Nice touch. It scores a point for originality.

And it starts very promisingly. There are a couple of bodies, a bit of family drama, decent characterisation, great pace, and some action... A real page-turner with tension building nicely and just enough hints are thrown in for us to suspect our hero's best friend might be... well, you know - not such a good friend after all.

But then it simply stops. Nothing happens whatsoever except that the good guys are getting more and more convinced that the bad guy is indeed guilty. There's no investigation, no new clues, no additional characters, no sub-plots (btw what the fuck was that crap between Adam and Dotty?), no nothing. And as this progresses, we too, of course, get a pretty good idea where all this boredom will eventually be leading to. So no mystery or tension, and to be honest, I really struggled to finish it.

The Grand finale is a bit weird. Since our team of good guys (still) has no proof or single solid piece of evidence, they come up with some ridiculously elaborate plan to get a confession from the suspect (ah, fuck it - by now, we all know he's guilty as hell) by simply torturing him. And not just him; Joe even threatens to kill his baby. Huh? Is this supposed to be hard-boiled? Not really. I would say it's pretty pathetic.

Mediocre and forgettable stuff. Skip it unless you're trying (like I do) to complete your Hard Case Crime collection.


Location:
Edinburgh and briefly a remote island of Orkney where Allan Guthrie was born.

Dames:
Tina - a pretty stereotypical hooker with a golden heart.

Blackouts:
I think there actually is one, although it's not explicitly specified. Judge it for yourself:

Cover:
Except for the horrific yellow background, it's a pretty nice, old-school illustration by Chuck Pyle (probably not this country singer dude). It depicts a scene in which Tina beats the shit out of some schmuck with a baseball bat. She's okay and pretty sexy, but I liked Joe more. Tough guy, leaning on the car in the background with a mildly amusing facial expression, more or less saying he doesn't give a shit.

Cool lines:
None really, which was really disappointing. Hoped for some of that insane Scottish street slang, but all we get in this one is an occasional "wee".
Posted by Jure P. at 8:40 PM