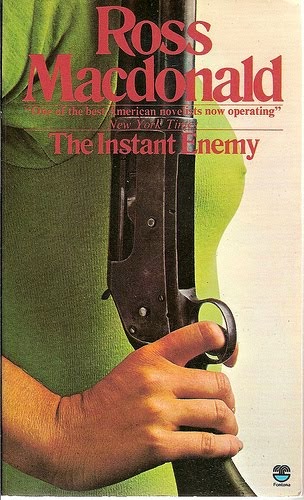 A simple case of a teenage runaway girl turns into a not-so-simple kidnapping case in which no ransom is demanded but instead triggers the action that causes a few skeletons to fall out of the closets. It takes some time to take off, and in fact, we need to wait until page 87 for the body count meter to kick off. But it builds up very elegantly, and we know that we are heading into some pretty heavy shit when Archer interviews a missing girl's friend and asks her if Sandy grew old all of a sudden. And then he reminds her that "And I'm not talking about having a baby. That's a minor problem compared with the other things that can happen to a girl."

And then it gets complicated. Really complicated. As usually with Macdonald, we need to go into the past where original sins lie. Fifteen years and three generations back in this one. Together with a bunch of characters and some identities changes, this makes the story quite difficult to follow at times. Not to mention its relentless pace - poor old Archer is on the move constantly, driving all the time and even taking a flight to San Francisco. He gets a call from his client at 5am and, for the next two days, only manages to get sleep twice for an hour in a car (an ambulance the second time). So it's pretty funny when he orders a rare steak for breakfast on the third morning of the case. He definitely deserved it!

It also gets darker and darker as it progresses. Practically all the characters are flawed in one way or another, and Archer's strongest motivation for working on the case is to keep the girl (even though guilty) out of prison. He also develops sympathy for her messed up boyfriend (this one is guilty as hell) and tries to stop him from getting into even bigger trouble. He succeeds only partly, so the ending (with a great twist) just leaves you sad. Like it or not, we live in a world full of greedy and amoral people.

Great stuff, another masterpiece. 14th in the series with Macdonald at his best. Although I have one little remark: there's a way too obvious giveaway when Archer is given a check for a hundred thousand dollars dated a week in advance. I didn't think for a second that he would actually be able to cash it. Total spoiler!

Body count:
2 in the present, 2 in the past and one unfortunate mud hen shot by some asshole

Object(s) of desire:
Davy wants to get to know himself and his father. Sandy wants to punish the guys who raped her after giving her the shitty LSD that sent her on a permanent bad trip. Rich people, as usual, want (even more) money, and (again, as usual) justice is what our knight in a white armour Lew Archer is after.

Blackouts:
I went out, all the way. After a while the darkness where I lay was invaded by dreams. Huge turning wheels, like the interlocking wheels of eternity and necessity, resolved themselves into a diesel locomotive. I was lying limp across the tracks and the train was coming, swinging its Cyclops eye.

Title:
I have no idea how to interpret it. I wasn't sure if maybe "Instant Enemy" was some kind of a phrase and googled it, but the search came out only with some ridiculous spell that you can put on your friend that you're pissed off at. Definitely not related to this book, no magic spells here.

Cover:
One of the weakest of Macdonald's Fontana reprints but still pretty cool. Accurate too, because Sandy steals a shotgun at the beginning. I can't remember whether the colour of her sweater was mentioned or not, but her car was definitely green, so I guess that qualifies.

Cool lines:
I let her take me into the large drab living-room. It had an air of not being lived in, just being endured.

She looked anxious and lonely, like an overweight ghost haunting the wrong house.[The Coolest!]

"I'm offering you a million dollars." She held her breath, and added: "Tax-free. You could live like a king."
I looked around the room. "Is this the way kings live?"
Posted by Jure P. at 11:55 PM