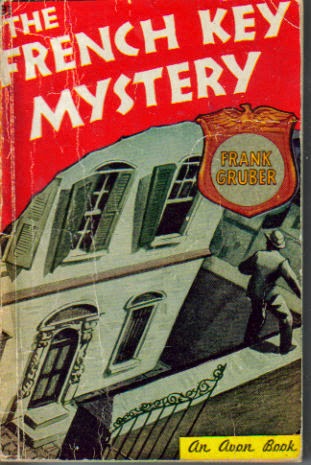 A locked-room mystery with a cool and original premise. Our hero and his side-kick, a couple of small-time con artists, get locked out of their hotel room, and when they manage to get into the room, they find a corpse of a total stranger holding a valuable coin in his cold hand. For some reason that I must admit had escaped me, they decided to find the killer themselves instead of calling the authorities.

It's a classical, good old fashioned cosy crime with an amateurish detective, but it's pretty cool. Not sure that the plot holds water all the time, but it doesn't really matter because it's so fast-paced and entertaining. And both Johnny and Sam are terrific characters, especially the former is super likeable, although he is portrayed a bit too romantically for my taste. But he definitely has his moments, and one of the best parts for me was conning that used cars salesman asshole.

A bit of a letdown is the final revealing scene in which the whole cast is assembled in Janet's dressing room after her successful stage debut. It's simply silly, but I guess in those days every crime novel had to end dramatically with everyone present in the same room and Poirot/Marple/.../Johnny Fletcher doing their whodunit routine.

Hero:
Fletcher chuckled. He was at reasonable peace with the world. His clothing was dry, he'd had his morning coffee and after a while the sun would shine. That was enough for him. He was a reasonable man.

"You're the man who lives - by your wits, shall we say?"
"Who doesn't? To be just as frank with you, Miss Winslow, I'm a book salesman. And if you'll pardon my modesty, I'll say that I'm probably the best book salesman in this country. I am a spellbinder-"
"True..." murmured Betty Winslow.
"At the same time," Fletcher went on heedlessly, "I've had some experience in criminal matters."

Dames:
Janet, an aspiring actress - "She was a swell girl but she lied like hell." [Fatale]

Blackouts:
A hundred little red blacksmiths pounded against his skull with little red sledges. Their anvil work made a terrible din. Fletcher cursed the blacksmiths and they went away. Bees came then and buzzed and were enveloped in scaring, agonizing fire.

Title:
"French key? What's that"?
"It's the invention of a Shylock hotel manager. Let's say you owe three weeks' room rent. The manager wants to lock you out, but wants to make sure you can't get in with your pass key and carry out your belongings. He takes this French key, which is made of soft metal, sticks it into the lock and breaks it off. You try unlocking that door then."

Cover:
Very cool one, and even without the usual blondes + guns. It's actually related to the story: after being locked out of their room, Johnny and Sam must go through the adjoining room and its outside windows still to get to their room.