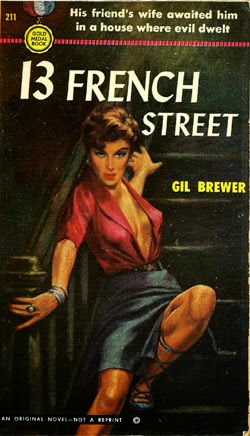 Very Edgar Allan Poe-ish beginning. Our hero arrives in a secluded countryside house visiting his old friend who lives there with his hot wife and ageing mother. Something's definitely wrong, and this delightfully dark and sinister atmosphere is nicely rounded up in the following dinner scene:

Dinner was a wake. We sat for three quarters of an hour over a rare roast of beef. And I met Verne's mother. Yes. Really there were three corpses at that table. The old woman, Verne, and the roast of beef.

Things then move forward pretty quickly with a somehow predictable sequence of an affair, a murder and a case of blackmail. Needles to say, we know from the start it will end tragically.

But it's still great. The affair between Petra and Alex is all about sex. Very carnal stuff. There are no profound declarations of love made while watching the sunset. To be honest, Petra does seem to be a bit confused and cannot make a distinction between love and lust. Her husband is impotent, making him "a machine with one part not working" to her. So "there's nothing wrong with him, only I'm too much for him... He couldn't keep me - happy", which leads to a conclusion that "He's sapped. He's a dead weight. He can't do anything any more."


The story is clever too. It's basically a drama about the damaged people in post-war America and not really a crime/mystery thing, although it smartly disguises itself as one. Jenny's character definitely plays some role since she has/had a relationship with Verne, but this never gets fully revealed, so the reader expects some kind of a twist. At least I did. I also liked that it didn't follow the usual pattern in which the hero gets fucked at the end and the femme fatale walks away unpunished.

Hero:
Alex -An archeologist with no place to dig and with no one to give a damn if he did dig - but with a dream.

Object of desire:
Sex/Money for Petra, Sex for Alex

Dames:
It's all about Petra (btw the very first word in the book is her name):

She was tall, slimly provocative. All in black. Black hair, worn long, tumbling around her shoulders. Black eyes, all pupil, or all iris. Her skin was very white. Her black eyebrows arched slightly, making her eyes seem bolder than ever, and her smile had shock value. Long-legged, full-breasted, and the neckline of her dress reached down. Down. She was bold, beautiful woman.

Petra. She stood alone. There was nobody like Petra. One image was made, then the gods shattered the cast. Why?

Her breasts were large, perfectly formed, upthrusting, and firm. Her body was flawless, as if she had been carved with some lusty godlike precision from a warm, utterly unblemished slab of pure alabaster.

Blackouts:
Lust and guilt drive Alex to drink himself into oblivion:

I barely made it to the toilet. I blacked out in an agony of retching, tearing the stuff up, trying to vomit all the crazy hell out of the bottom of my guts.

The minute I stepped through the doorway at 13 French Street, I sensed something wrong - something I couldn't nail down. But she closed the door before I had a chance to run.

Also, a bit of (not exactly subtle) symbolism. Number 13 doesn't need an explanation, and the France part of the title comes from Alex and Verne's serving in France during WW2, where their friendship was forged, and Verne (admittedly drunk) had promised Alex that they would share his future wife.

Cool lines:
He looked as if somebody had machine-gunned his soul.

His voice was hollow, and when he smiled it wasn't a smile at all, just a torturing of the muscles around his mouth.
Posted by Jure P. at 11:22 PM