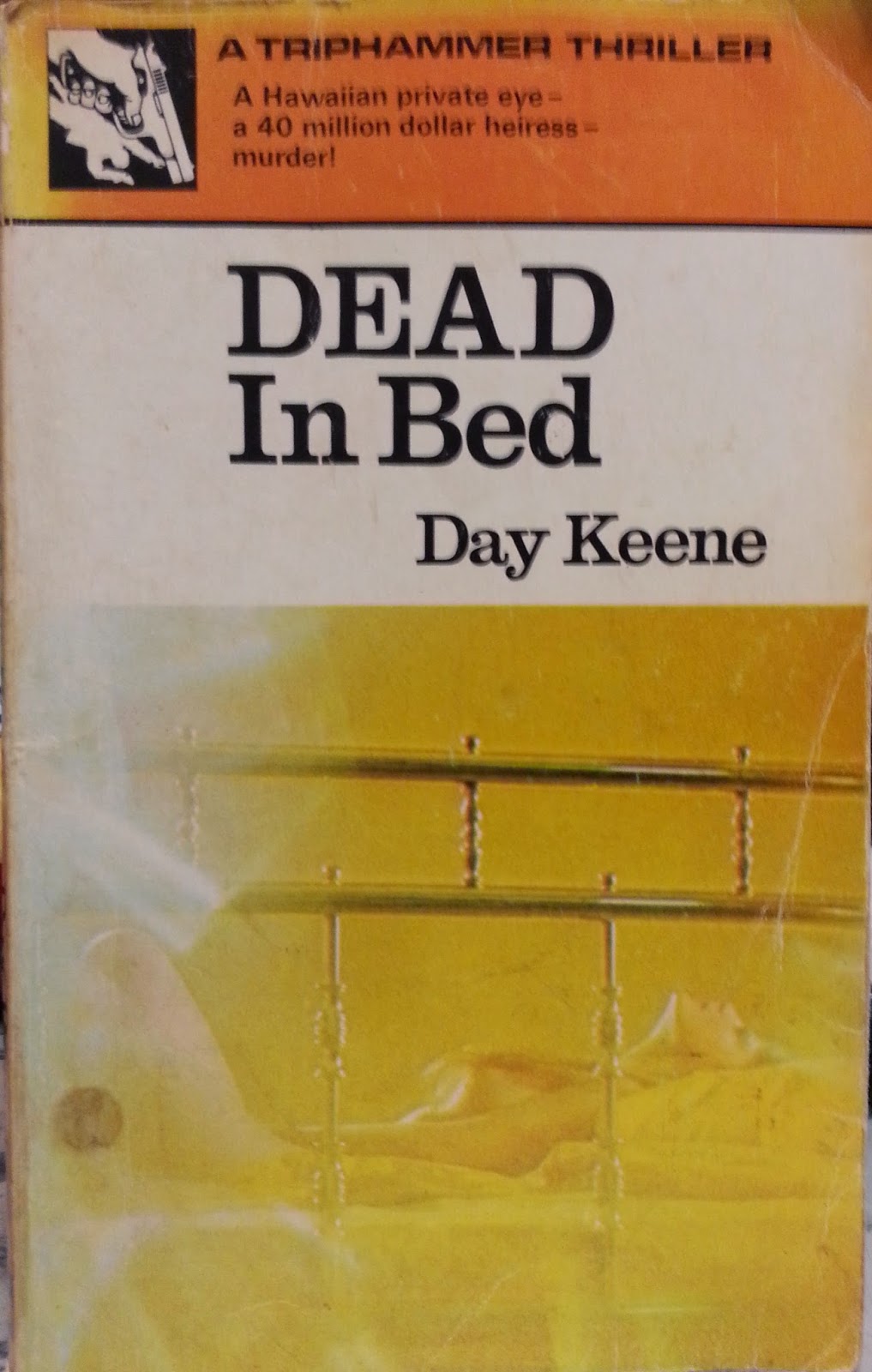 In 1959 there were 80 private investigators and 145 detective agencies listed in the LA yellow pages. Still, our damsel in distress insists on hiring Johnny Aloha to find her mother, who has been on a binge for several days. The only reason why Gwen chooses him is that he used to know her mother 15 years ago when he was still in his teens. She's so determined that Johnny is one and the only one adequate enough for this job that she flies from LA to San Francisco to persuade him to take the assignment instead of going on a planned vacation to his native Hawaii. And she offers him 10 grand (around 80 grand these days according to this inflation calculator) and - in a good femme fatale tradition - promises him a "bonus of her fair white body"...

So we have a missing person case with a personal touch and not the most believable opening. Not exactly promising, but I've read worse, and some eventually did turn out to be quite good. So I carried on optimistically.

For the several following chapters, it's okay. Classical sleuth story - PI follows various leads (torn letter fragment found in a wastebasket, lost earrings, an inscription on the back of the old photo, notes etc.) that take him from point A to B and C. He's getting closer and closer to the elusive Hope Starr and along the way the supporting cast gets introduced: a (mandatory) cop friend, (another mandatory) newspaper reporter friend, English Colonel and his (I kid you not) butler and his secretary Betty. There's also a sub-plot about some Chinese badass gangster with a score to settle with Johnny. Which is cool and a pretty smart touch as we (together with Johnny) are unsure where the shit will come from during the investigation.

But this whole setup is pretty much totally spoiled. Because from very early on, it turns out that the mentioned bonus about getting Gwen's body wasn't just a subtle hint. For some reason, this innocent (literally - she's still a virgin) kid totally falls for Johnny, whose libido responds accordingly. Most of the time, the two of them forget entirely about the "case" and simply try to get laid. This whole "relationship" is a total mess and borders on bizarre, so I won't even try to describe it. But in any case, it totally takes the focus off the plot and makes the whole thing a bit dull.

The ending is a bit better. The twist is okay, but the problem is that it's hardly unexpected. The thing is that so much time was lost in that corny romance/sex nonsense that other characters never developed, and not much has happened either, so this "twist" is pretty obvious.

It's entertaining but nothing special. I guess it was edgy and provocative in its time with stuff like Hope fucking GIs before them going back to Pacific war (giving them hope?), but it just hasn't aged well. It gave me an impression that Keene had an idea about the basic plot, but instead of developing it further into something substantial, he rather opted to simply throw some sex into the pot, wrap it up and pick up the check.

"Now tell me this. How good a detective are you?"
I didn't see any reason to be modest. "One of the very best. And if you don't believe me, you can ask the Internal Revenue Department."

"He said you were a crazy Havaiian but one of the best private eyes in the business and could be depended to co-operate in every way with the law."

Dames:
The most interesting character by far is Hope Starr, "The oversexed, fabulous and fantastic, much married cafe society beauty" and "...practicing nymphomaniac in the last stages of acute alcoholism..."

And let's not forget Aloha's secretary Betty. Ex-Miss Strawberry Festival of some small town in Oregon. Another virgin, even though she's 19 going on 20.

Blackouts:
In the beginning, he's beaten and mugged, but he doesn't pass out. Our Johnny is a pretty tough guy because, towards the end, he gets a blow from behind and still doesn't collapse:

It numbed me rather than hurt me. I could think but I couldn't move. Also, by some weird chemical process, all the calcium in my legs seemed to have evaporated.

But they finish him off on the next page by hitting him again with the blackjack, and he's finally out.

Title:
I not only had the wrong woman in my bed, but, unfortunately, she was dead.

It depicts the scene in Big Bear hotel where Gwen waits for Johnny to deflower her virginity. And it's just one of those that doesn't make much sense. I mean, she picks him up in his apartment, and then they drive 3+ hours to stop her mother's bigamist wedding. They check into a hotel, and then, instead of facing her, she sends Johnny to deliver the ultimatum. So, I would assume that she's tired and the whole situation is very tense and awkward. But I would assume wrong because while waiting for Johnny, she simply strips, jumps into bed and waits for him to get back so that they can finally have sex.

Cool lines:
She's had six or seven husbands and God and the laundries know how many lovers.
Posted by Jure P. at 6:54 PM