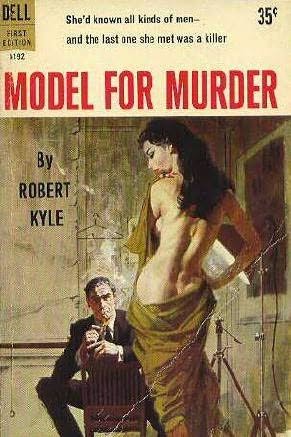 This one doesn't waste any time with the usual introductions. On the very first page, there's a mandatory "I'm private investigator" monologue, and next, we learn that we are in New York and that our gumshoe is already on the case. He's about to handle $500 to a girl blackmailing his client (page two) when she starts shooting at him through the closed door. And then, for some strange reason (or is she simply pissed off at herself for failing to kill him?), she decides to shoot herself!?! And we are still in the middle of the third page!

Great start! And it gets better - proxy endorsement letter (something related to the stock exchange trading), stolen jewellery, and counterfeit money are objects of desire in this one. They are, of course, also the reasons for the mayhem that follows. Blackmail, murder, robberies from the past, fucked up families, sleazy hotels (and fancy hotels with sleazy detectives), gangsters, G-men, cops, jazz clubs, beautiful women, tough guys,... and our private dick in the middle of all this. Used and eventually betrayed by his client.

Maybe it sounds too convoluted, but it's really easy to follow. Partly I think, because the action is almost entirely driven by our hero. Not much happens without Ben's actions actually provoking it. There are no parallel sub-plots that would later cause some dramatic twists. No clues are given that would not eventually become important.

But although a little too linear for my liking, it's still an enjoyable old school hard-boiled novel. Always a pleasure to go back in time when people lived in hotels, used public phone booths and when police used something called Speed-photo to send fingerprints around. Amazingly, even the mighty Google cannot come up with anything useful when searching for "Speed-Photo".

Dames:
Plenty of them in this one. The first one to walk on (and off) the stage is Gail Ives - "an obscure supper-club singer, at present unemployed". Then there's greedy and amoral Mrs Ringsted (she was in her early forties, and had made up her mind to stay there as long as possible), a call-girl Sandra Foote (although young, this girl had her grow), beautiful model Dorothy Terranova, "skinny" and not-so-dumb trophy wife Diane Santos. And in Cleveland, there's a prostitute Jeanette and another one whose name has escaped me. I probably forgot some other girls altogether...

Ben manages to score with not just one, but two of them!

Simply "There was a blaze of reddish light." Regaining consciousness is a bit more elaborate: "The first thing I saw when I opened my eyes was the cluster of stars known as Orion. It is the only constellation I can recognize, and I don't see it often, since I seldom find myself lying on my back in a parking lot after dark."

"... he only hit me once. I could still distinguish between light and shade, but physical objects bled into each other , and the smog was bad. I was able to walk by myself, though they insisted on helping me."

Title
It's cool sounding, but it doesn't have anything to do with the story. Or does it? The thing is that Dorothy is actually a model and a friend of the victim. But after her promising (and very sexy) introduction, her character is left behind completely forgotten, so I expected her to re-appear in the final twist. Something like when we all expected Seagal to show at the end of the Executive Decision even though he had dropped from the plane an hour before. But nothing like that happens... so nice touch, Mr Terrall - you got me on this one!

Cover
Fantastic one, super cool! It depicts (with a bit of artistic freedom) a scene in which Ben meets Dorothy after her nude photoshoot. No credit is given to the illustrator, but it's the work of the great Bob McGinnis, according to Amazon's website.

Cool lines
I washed and shaved, used one of Diane's big-toothed combs on my hair and straightened my tie. There was lipstick, dirt and blood on my shirt, but there was nothing I could do about that.