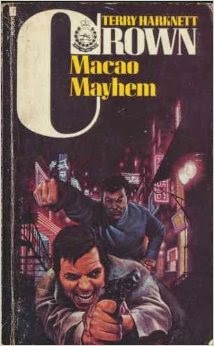 I was a bit disappointed at the beginning. Just another formulaic thriller, placed in somewhat exotic surroundings and fueled by over the top violence. The story is about some sinister mastermind criminal orchestrating a plot in which a few small-time Hong Kong gangsters would kidnap the high ranking US official and sell him for 5 million bucks to the Chinese (I think). It gets even more ridiculous when it turns out that this genius (mysteriously referred to as "Man from Macao") is only slightly less small-time than his crew. The story just doesn't add up (why the hell would killers bring a massacred body to a whorehouse?), and to make matters worse, the police investigation is pretty pathetic too and based on some hard to swallow coincidences (victim was a cop's friend, his partner's informer knew her housemaid etc).

Mediocre stuff, especially considering it was written by the author of the solid Squeeze Play. But just when I expected it to fall apart entirely and explode into total chaos (true to its title), it got better. Much better. Relentless pace settles down a bit, and marginal characters (Jenny, her boyfriend/pimp Kai) become more involved. It turns into a 'proper' mystery that is actually quite smart, makes sense and builds up some proper tension as it nears the conclusion.

Unfortunately, neither suspense nor narration is sustained, and the whole thing pretty much disintegrates at the end. Too bad, it would deserve a better ending.

It's far from perfect and could be improved by rewriting some dialogues and shortening action sequences descriptions, but I quite liked it anyway. Characters are natural, made of flesh. Especially both killers are memorable - contrary to the cliches, they repeatedly (three attempts in 24 hours!) fuck up their contract and Jo is just a scared alcoholic. Our two cop heroes also get fair treatment but let's leave them for the next time. Will most probably check out other books in this series.

Hero:
Senior Superintendent John Crown of the Royal Hong Kong Police Force and his partner Chang Po. Their senior calls them "The Lone Ranger and Tonto".


Location:
Hong Kong (where "Spies were, of course, part and parcel of the scene.") and briefly Macao.

Body count:
9, most of them meet their maker in a pretty gory fashion. Check this:
Dames:
Unfortunate Mu Li (one of the highest paid call girls on the island), a bit less unfortunate prostitute Jenny (for some reason, she's referred to as "whore" all the time, which was really annoying), and let's not forget the sexy maid Rosita.

Title:
Pretty unoriginal. I think something like "The Man from Macao" would be better (I admit it's a bit 007-ish). It's also not very accurate because only 22% of killings take place in Macao. So "Hong Kong Mayhem" would be more appropriate (but still unoriginal).

Cover:
Illustration (not credited) of Crown and Chang causing mayhem on the streets of Macao. Crown's facial expression is really cool, he looks pretty pissed off.

First time on this blog:
Crime in Asia.

Cool lines:
"No ifs!" Crown snapped. "You tried to sell yourself into this mess. I may let you buy yourself out of it. The currency is words."
Posted by Jure P. at 10:20 PM