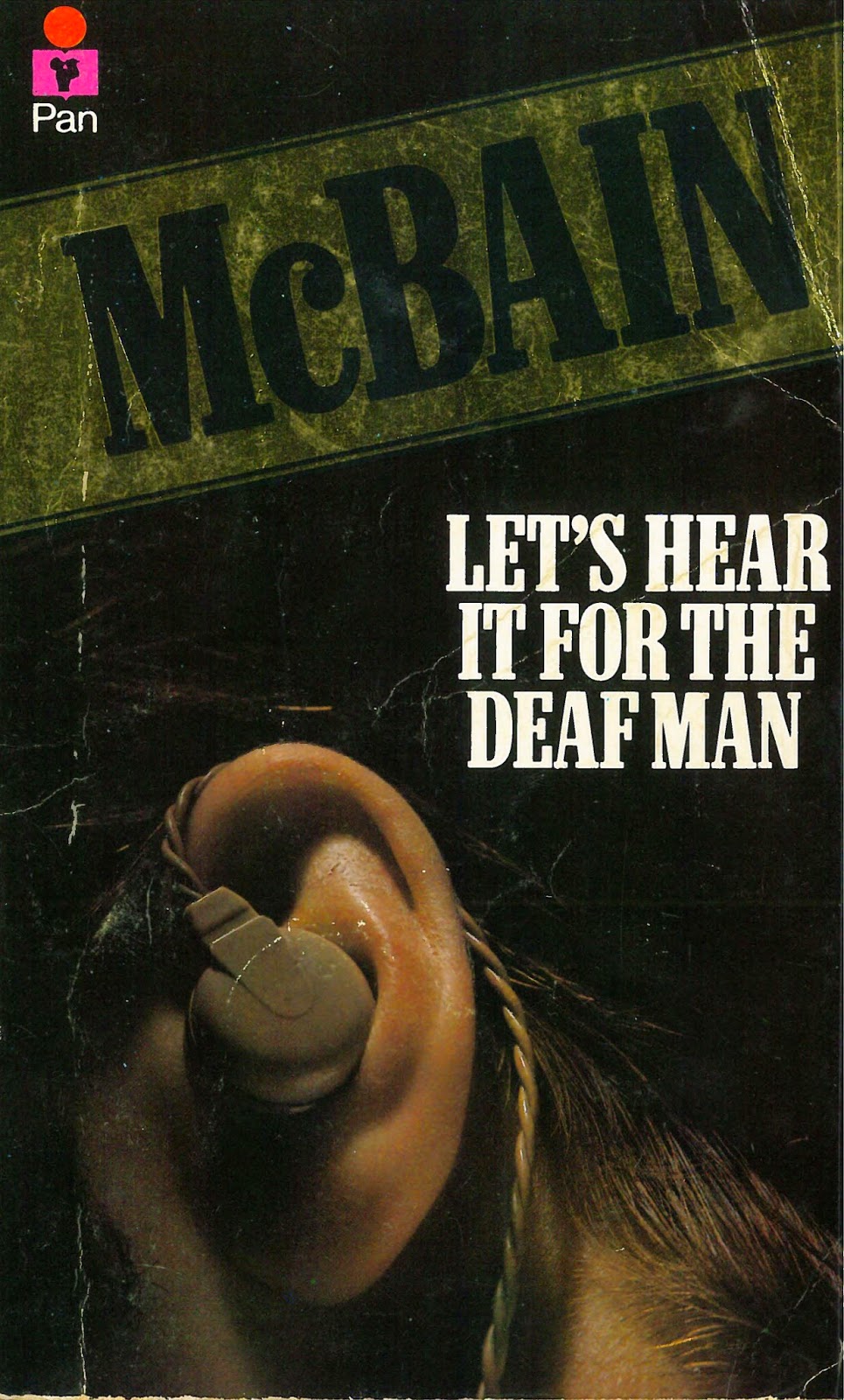 In this one we follow three unrelated cases assigned to detectives Carella and Kling. So, I guess, it's about a typical week at the 87th precinct police station.

The best one by far is the "Jesus case" - a young man wearing only shorts was found nailed to the wall in the abandoned building. I loved the scene in which various officials (medical examiner, detectives, policeman) who arrive at the crime scene argue about who is responsible for getting the poor John Doe off the wall and into the morgue. The investigation that follows is not exactly a typical “police procedural”, but I think it’s a pretty common one – basically lots of legwork. Since Kling's only solid clue is a left tennis shoe, all he can really do is roam around the neighbourhood asking people “Have you seen this man?” Things do start to unravel when he finally encounters a suspicious guy acting nervously and not willing to cooperate. And he’s missing the left shoe...

So, btw, I would disagree with that “he eventually cracks [the case] mainly thanks to the long arm of coincidence” in the otherwise excellent review that can be found here.

The second story is cool too. It’s about catching a daring thief who operates in an area of posh apartments and who’s arrogant enough to leave a little kitten as a calling card in burglarised flats. It’s pretty intriguing and, at times, funny (I liked that part where surveillance cop’s undercover is immediately blown by a stripper) with an unexpected ending. Needs to be said though, that the whole thing gets a bit tarnished by a silly romance between Kling and supermodel Augusta whose flat was on our cat (kitten)-and-mouse guy's list. It goes something like this: "You're so beautiful... Yes, I am, but it's my job to be beautiful... You are beautiful too"...

The third one, unfortunately, the central one, is a total mess. It's about this uber criminal Deaf Man - modern Dr Moriarty kind of type - planning and pulling off a bank heist. The essence of his ingenious master plan is to hit the bank twice in the same day so that the second time employees wouldn't be so alert and (with a little bit of luck) police would ignore the silent alarm even if one would be triggered. Hm... Obviously, for this to work, Deaf Man needs to make sure that the first attempt will fail, so he sends a few cryptic clues to the police department. Which are, in fact, so cryptic (for example, picture of the Japanese zero fighter symbolises circle which represents repetition; get it?) that police chooses to simply ignore them. And I must say I didn't blame them...

I don't know. I guess McBain tried to blend his police procedural stuff into a classical mystery, but the end result just doesn't work. But nevertheless, it was a quick and fun read. Definitely worth 1 euro it cost me.


Location:
The usual "The city in these pages is imaginary..." stuff, but it's pretty obvious that it takes place in New York. In fact, the whole 10th chapter is "dedicated" to the city which was for me a bit redundant...

Body count:
5, not counting "badly wounded" robber of the second "assault team" and also not counting the guy killed in the domestic violence call from the above mentioned 10th chapter that has nothing to do with any of the three stories.

Dames:
Supermodel Augusta Blair - “He had never seen a more beautiful woman in his life”
Angela Gould  - "perhaps the least attractive woman the Deaf Man had ever met."
Mary Margaret Ryan - "as sweet a young lass as had ever crossed herself in the anonymous darkness of a confessional."

Blackouts:
Carella gets knocked out when muggers sent by the Deaf Man steal his badge and gun.

Title:
Pretty weak one in my opinion. And it totally ignores the other two stories. Something like "Deaf Man's caper, the Jesus case and little kittens left behind" would sound much cooler.

Cover:
Deaf Man is not really deaf, he's just hard of hearing so he wears a hearing aid.

Notable cover blurbs:
For some reason reviewer at Sunday Telegraph found this "Marvelously ingenious, as always." Surely they were not referring to Deaf Man's master plan!?

Cool lines:
The girls were wearing blue jeans and long hair. The boys were bearded. In terms of police investigation, this was awkward. It meant they could be (a) hippies, (b) college students, (c) anarchists, (d) prophets, (e) all of the foregoing. To many police officers, of course, long hair or a beard (or both) automatically meant that any person daring to look like that was guilty of (a) possession of marijuana, (b) intent to sell heroin, (c) violation of the Sullivan Act, (d) fornication with livestock, (e) corrupting the morals of a minor, (f) corruption, (g) treason, (h) all of the forgoing. Carella wished he had a nickel for every clean-shaven, crew-cutted kid he had arrested for murdering his own brother. On the other hand, he was a police officer and he knew that the moment he showed his badge in this place, these long-haired youngsters would automatically assume he was guilty of (a) fascism, (b) brutality, (c) drinking beer and belching, (d) fornication with livestock, (e) harassment, (f) all of the foregoing. Some days, it was very difficult to earn a living.
Posted by Jure P. at 4:04 PM