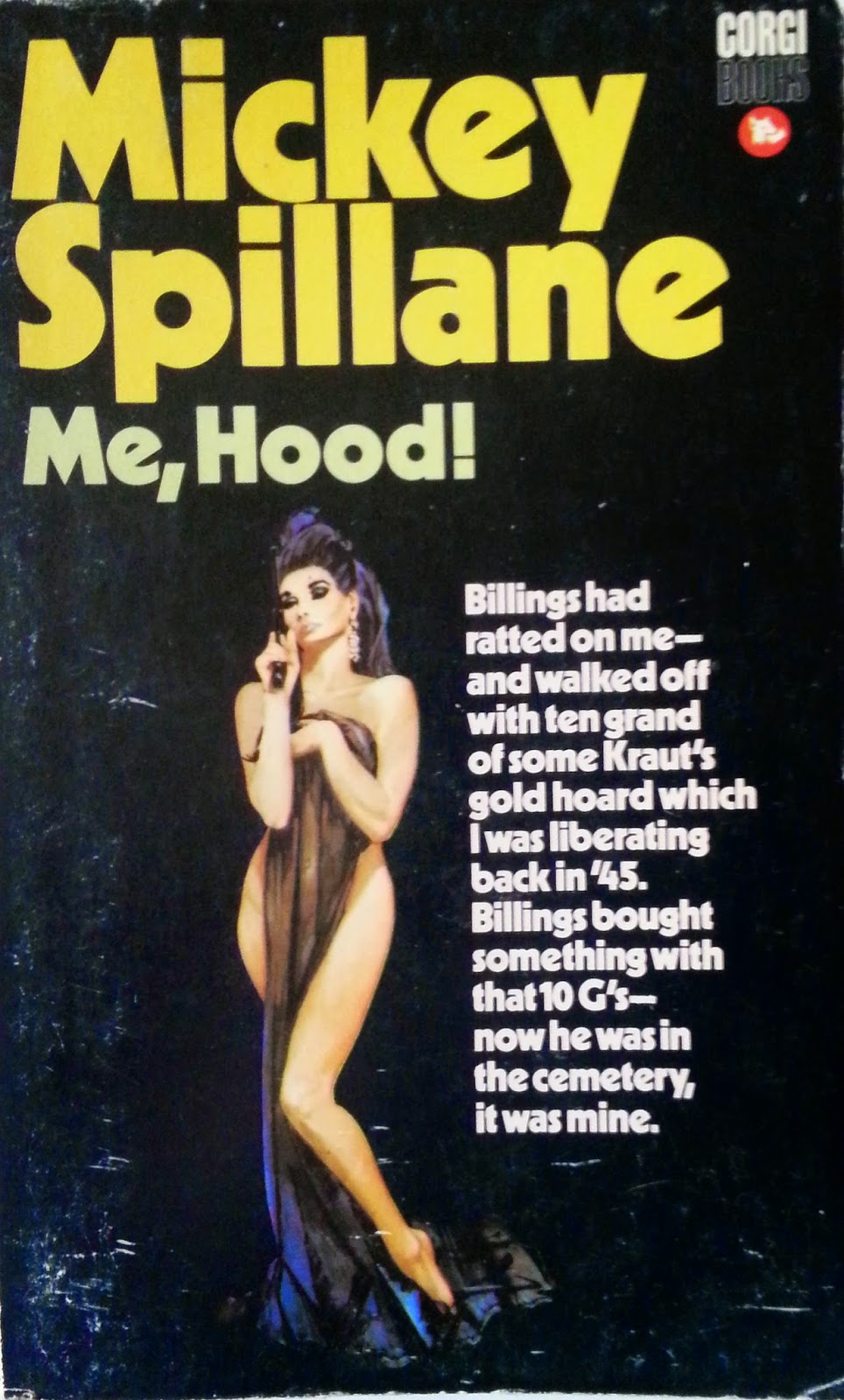 Needed something normal after that excruciating Woolrich experience, and who else would be more appropriate than good old Mickey Spillane? It's incredible how popular his titles still are and how easy (and cheaply) they can be obtained. So I usually keep a few of his paperbacks ready for the right moment, and this little one containing two novellas and one short story seemed perfect. With the titles like "Me, Hood!" and "Kick It or Kill It!" there was no doubt about what I was going to get.

And yes, no surprises here. It's yet another sex & violence madness. The plot is pretty far-fetched, and due to its relentless pace (the whole thing is about 70 pages long), it quickly becomes almost incomprehensible. And to make matters worse, it falls into the "grand issues" category. But at least we get an early warning about this because our hero, after being recruited by a secret service (I think) to do some dubious job, quickly concludes that:

Patriotism doesn't exist on any local level. Suddenly we're international and I can only think of three fields where you striped pantsers could exploit me: The narcotic trade through Italy, Mexico or China; illegal gold shipments to Europe; then last, the Commies.

Welcome, once again, to the beautiful, frightening and simplistic world of Mickey Spillane. Btw - I liked the touch with commies being written with the capital C - makes the whole thing a bit personal, don't you think?

But it turns out that the evil our hero will be fighting in this one ticks the first check box. Heroin! And this is where things get absurdly hilarious and make this short pulp unforgettable. Because - believe it or not - 8 kilos (kilograms) of smack in the year of our lord 1963 cost "Millions. Not one or two. Not ten. More than that. Enough to get a whole city killed off."

Let's have a little break and do quick math. To help us understand things correctly, let's calculate the running costs of a junkie living in NYC in the early 60s. Assuming that street price is twice as much as 'retail' (probably much more; I have no idea really) and considering inflation that blows 10 million to 77.79, we can calculate that price of a single gram is 19.447.50 US dollars. Since the daily dose of an addict is at least 1 gram (according to this site), we can conclude that an average junkie in 1963 would spend almost 60 grand a month supporting their habit. Which, in other words, means that drug addicts used to be millionaires.

So this makes a difference and puts a new perspective on the whole setup. Obviously, since "There hasn't been a single shipment that size in twenty years", we can now better understand the ridiculous body count and involvement of the CIA and Mafia. Italian boys even dispatch their top east coast enforcer, Keyser Soze-like dude named Lodo, to kill our hero. Which is another (also unintentionally funny) story, but I don't want to reveal everything.

Kick It or Kill It!

Craziness continues. Drugs again, but this time we also get Commies because "Reds are injecting a poison into this country." All three axis of Evil are somehow involved: Cuba is a collection point for China-grown narcotics, and the whole deal is supervised by the Soviet attache. Also aided by mysterious and uber sinister Mr Simpson, who eventually (and most unsurprisingly) turns out to be a corrupted senator.

In short, it's Spillane's take on Hammett's Red Harvest. A secret agent comes to some godforsaken little town and cleans it up. So I don't think that recapping the last five pages will be some major spoiler:

"The guy on the dock died easily and quietly... I took him with one sudden stroke... The other one... went just as easily... My hands were tied. My feet weren't. It took only three kicks to kill him... Then I was ready... When the man there saw me he tried to call out and died before he could. The other one was just as unsuspecting. He died just as easily. Soft neck... There was Harry Adrano. I shot him. There was Calvin Bock. I shot him. There was Sergei Rudinoff. I shot him and took the briefcase off his body and knew that what I had done would upset the Soviet world... There was the man who owned the airlines and I shot him... so I shot him too... I brought the shotgun up and let him look all the way into that great black eye and then blew his head off."

I liked that "soft neck" touch. Otherwise, no further comments are needed...

Hero:
I asked, "Who am I?"
His answer was flat and methodical. "Ryan. The Irish One. Sixteen arrests, one conviction for assault and battery. Suspected of being involved in several killings, several robberies and an un-cooperative witness in three homicide cases. Associates with known criminals, has no visible source of income except for partial disability pension from World War II. Present address.."
"That's enough," I said

Body count:
18, not counting "Holmes in emergency ward with a couple of slugs in his chest and not expected to live."

Most times a woman is nothing... then one day you see one... you not only like but one you must have... instinctively you know... she's big and beautiful... full-breasted... She's not trying for anything. She doesn't have to... long legged and round and in her loins there's a subtle fire that can be fanned, and fanned, and fanned.

Blackouts:
nope, but there is one in "Kick It or Kill it!"

"The things you do... are so different. I never know what to expect-"
"They're hood things, kitten."

Cool lines:
I don't think I looked like the typical Haynes client. I wasn't carrying a briefcase, either. I was carrying a rod, but that was one reason for the $200 suit. It didn't show.