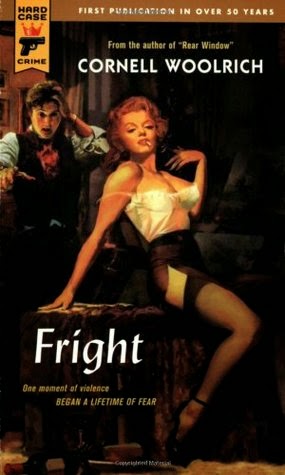 All good stuff in this one happens in the first fifty pages. And such brilliant start it is indeed! We get to know this dude Prescott who is pretty unsympathetic figure - an average, self-centered guy, Wall Street wanna-be yuppie who's about to make a next step on the social ladder by marrying a girl from a wealthy family. One night he gets drunk, picks up a girl in a bar, takes her home and things happen. Soon she begins blackmailing him and finally he accidentally kills her.

It's a cool setup, especially because we don't (at least I didn't) feel sorry for him as a blackmail victim and kind of secretly cheer for Leona. True, she's a cold bitch but also very charming in her own way. Plus she has plenty of style when driving our poor Press crazy.

But then it begins. It probably began right at the start, but I didn't really notice because introduction was so good.

You see, in Fright nobody ever simply says something. Instead they relate, protest, admit, confine, echo, demand (and counter-demand), exclaim, interject, concur, chortle, parry, admonish, note, retort and even - I kid you fucking not - ejaculate!

This shit is incredible. And relentless! While reading it, I kept thinking about the video I'd seen in which Elmore Leonard gives a few writing lessons. One of them being that "one should never use a verb other that 'said' to indicate a dialogue and certainly shouldn't use an adverb to modify 'said'.. because that's the author and not character talking". I'll bet that he had just finished reading Fright when he said that. Anyways, check out the clip, it's really cool and interesting!

I did read some short stories of Woolrich recently and as far as I can remember language used in that book wasn't so archaic and stories were easy to follow. I guess in this one he wanted to be authentic as much as possible since Fright is taking place in 1915. But still, for non native English speaker as myself, it was at times agonizing. I have great respect of all languages and enjoy old fashioned expressions (see 'cool lines' in Bulldog Drummond or Blackadder clip) but this was simply too much. No joy in reading a book if one needs to look-up obscure words in dictionary every five minutes. I just lost a modicum of my affability...

So much about the form. After the initial promising beginning, story falls apart. Or to be more precise: it turns into heavy psychological melodrama in which Press is paralyzed with fear and sinks deeper and deeper into madness and paranoia. Eventually he even has a nervous breakdown and contemplates suicide. There are occasional attempts to revive the plot and accelerate its pace but they are not very believable. Stuff with shooting the wrong guy is pretty pathetic, but episode with insurance agent is pretty cool though.

It is unforgettable, but for the wrong reasons. And I'll be definitely reading the next Woolrich on my Kindle with built-in dictionary.


Location:
Part one is titled "New York", second one simply "Some Faraway Town" and the last again "New York Once More" 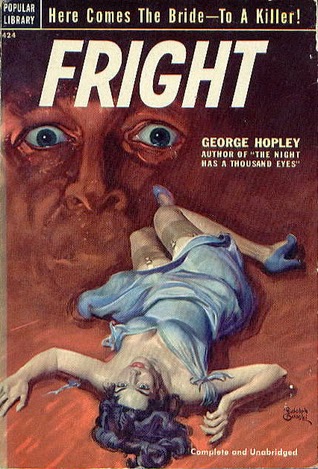 She was quite young; twenty-two or twenty-four at the utmost. She was quite pretty, but in run-of-the-mill sort of way. It was not a lifelong beauty of feature and formation such as Marjorie had; it was a transient coloration lent her by the fact of her youth alone, that would disappear with that again some day.

Blackouts:
There isn't typical one but towards the end Press is so fucked up that he's kind of half conscious all the time. Needs alcohol to be able to talk and even to get asleep on the train back to New York,

Title:
Press is overwhelmed, totally paralyzed with fear of getting caught for murder. No remorse, no sympathy, no nothing. Which makes him an even bigger asshole...

Cover:
At one point Press "sobbingly screams" at her: "You're not human at all! You're a demon". Nice cover by Arthur Suydam but I found even better one.

First time on this blog:
First entry with YouTube  clips embedded. It's pretty easy and somehow cool so I also used the one with Blacadder although I know I pushed that language thing a bit too far with it.

Cool lines:
The man's head, over the top of it, was like an egg sitting in its cup, waiting to be cracked.
Posted by Jure P. at 12:11 AM