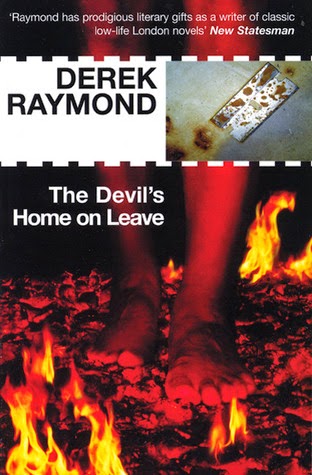 Simply loved He Died with His Eyes Open, so I expected something special, but this one had still caught me unprepared. Insane stuff. It breaks almost every crime writing rule!

It begins with the probably shortest chapter I have ever read. Check this:

What follows is a discovery of the body of a guy killed in such a gruesome manner that even Herschell Gordon Lewis would be proud of it. Poor bastard had been killed with a humane killer (needle-gun used for cattle slaughtering) and then boiled (!??!!!), bled out, his teeth were totally smashed, he was dismembered, and finally, his remains were put in several shopping bags. WTF!?

But if you think this is gonna be yet another standard serial psycho-killer chase formulaic thriller, better think again. Because pretty soon, our nameless sergeant discovers (without much of an investigation btw - it's just "practice and instinct") who the killer is, and the cat-and-mouse game can begin. But things start to go a bit odd even before that - chronological narration stating specific dates (it begins on April 14th btw) gets abandoned almost immediately as well as the side-kick kind of a character of an investigating reporter. Like I said - the usual rules are used just to be broken and to mislead the reader.

Lots of stuff happens afterwards, and the whole thing culminates into some weird political espionage involving Russians and the UK defence minister. The ending is excellent too and (surprise, surprise) unexpected. Without revealing too much, let's just say that crime sometimes does pay.

But of course, this is as far from whodunit as it can possibly be. It's about the evil vs good, sense of justice, humanity, authority (I liked the touch about his boss being reduced to just a voice over the phone), power and its abuse (defence minister is a gambler and a pervert), remorse, dealing with guilt and more.

And who the hell needs a coherent story anyways when you read something so very stylish and authentic (see the dictionary in the 'cool lines' section), violent, noir-ish, hard-boiled (police brutality in the 20th chapter!), with such an interesting hero protagonist and totally insane villain?

It has to be said it's also highly morbid (see the body count section), bleak and disturbing, so I wouldn't recommend it to everyone. But to me, it was a total thrill, I simply couldn't stop reading it!

Hero:
Nameless; in his early 40s but still only detective-sergeant because "Justice is what I bother about, not rank.". Still working in Factory on Poland street in unexplained deaths department A14. You can find him in room 205.

Body count:
Violence and death are everywhere in this one, and I tried to keep the count as accurately as possible. I'm pretty sure there are 5 corpses directly related to the plot (or let's say to the plot's present time), and at least 15 are mentioned in various contexts and sub-plots: from an old woman thrown from the car (senseless killing  for 70 quid of gear plus maybe a tenner) to serial killing of three (so gruesome that squatter girl who finds them dies of a heart attack) and to some random Norwegian "geezer" (who buried some young men in his garden). And let's, of course, not forget our hero's nine-year-old daughter Dalia who was pushed under the bus by her crazy mother.

Dames, Blackouts:
Nope, none. And for the last time - standard rules are all broken in this one.

McGruder personifies the devil, and there are numerous references to him (or is it "it"?). And this asshole truly is one sick fuck - he gets a hard-on when he's about to kill somebody and then comes into his pants afterwards.

Cover:
It's probably the only thing I kind of dislike about this masterpiece. I understand the fire-walking metaphor, but there are so many more suitable motives that would do better justice to this book's unique atmosphere.

Plus a few slang words I noted down. It might come in handy next time I visit London...