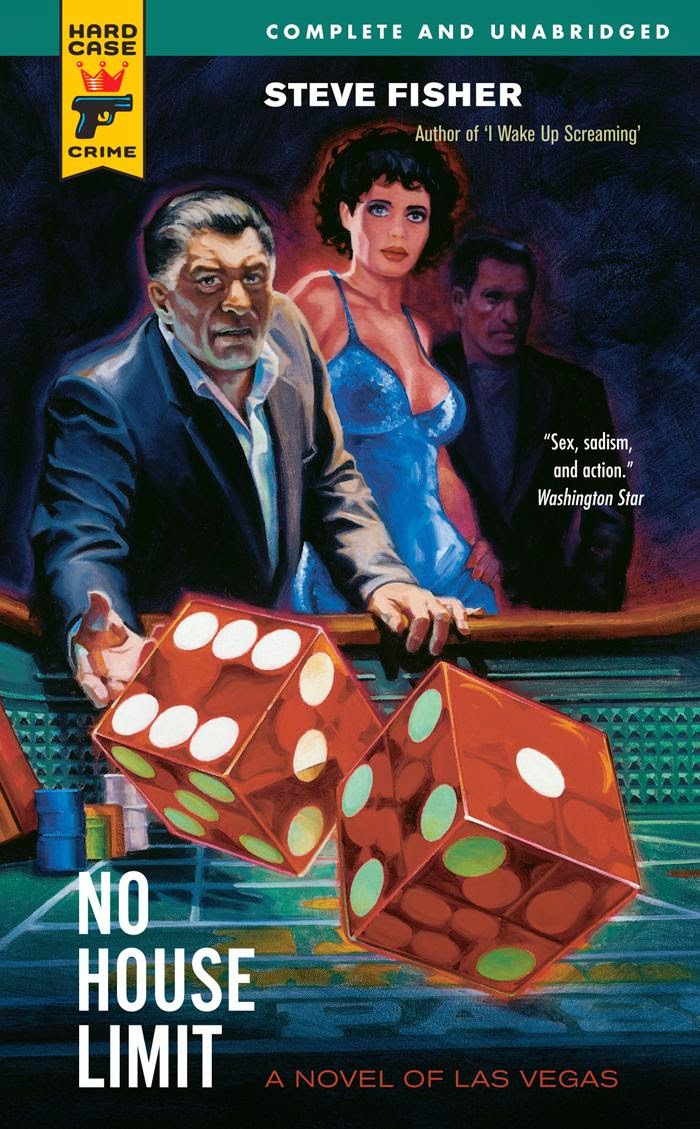 I'm not really into the gambling themed stuff, but I just couldn't leave this one sitting on a two-pound discounts shelf in London's Forbidden Planet store. Published by the one and only Hard Case Crime, it almost felt like a duty to buy it and not just an act of mercy. But seriously - where is this world going to when one can buy half a dozen new books for a price of a pint of Guinness and a pack of cigarettes...

Anyways, like I mentioned, gambling is not exactly my thing. So I had a problem comprehending the basic premise in this one. There's an independent (=not run by the mob) casino in Las Vegas, and some anonymous syndicate (=mob, I'd guess) is trying to take it over. Since "gamblers are not gangsters", they hire some ultra bad-ass high-roller who will play crabs for three straight days and nights against the house, attempting to bankrupt the casino by winning ten million bucks. And for some reason, casino owner Joe (our hero btw) needs to be present at the crap table all the time.

So the whole concept seemed a bit silly to me. But I did think at the beginning that it had the potential to develop into something (more) interesting. There are few cool characters and beautiful dames (we are in Vegas after all), and parallel to the main story, there's another subplot in which Joe's right-hand man is shielding his boss from the various distractions that might break his concentration. Because during this "siege", syndicate tries to disrupt things by "pushing the queer chips", switching dices with "shaved" ones and even dispatching a hit-man from Chicago.

But all those episodes are just fillers for the central theme. Which is not even gambling. It's LOVE! Joe and his piano player both fall desperately for two women they've just met. In fact, once the siege is over, both of them will propose to their newfound loves. So instead of a hard-boiled gangster pulp novel, this turns into incredibly cheesy (see the 'cool lines' section) and, at times, hilariously funny romance crap. Too bad.

Blackouts:
None, even though Joe is on the verge of collapse all the time during the siege. He pulls it off because in between the sessions Sunny takes good care of him (even fucking him twice!).

Title:
Bad-ass gambler Bello requests that the casino lifts the betting limit, and Joe - as a fellow high roller - is unable to reject his request since not respecting such unwritten rules would ruin his reputation. I know, I know... I told you I've found the whole concept silly...

Cover:
The guy in front is definitely Bello, the girl is most likely Dee (an exquisite young girl ... with large breasts and rounded hips ... in a dazzling white blue-sequined cocktail dress ... looking sexy), and my guess is that the guy standing in the dark behind her is Sprig since (a) he's a guy who operates from the background and (b) Joe is probably standing at the other end of the crap table facing Bello.

The girl's face looks a bit strange, but otherwise, it's quite a nice illustration. Credited to R.B. Farrell (for whom Google has never heard of btw)


Cool lines:
No witty, snappy one-liners in this one, I'm afraid. There's occasional cool slang, mostly related to gambling, but I'll remember this one for some truly corny dialogs that made me laugh my ass off. Chapter 20 is simply brilliant! Here it is, a bit condensed: