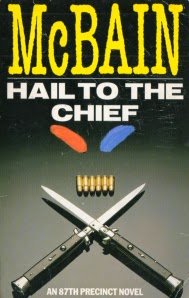 A nostalgic one. My father used to be a big admirer of McBain, but I just couldn't get into his writing when I was in my teens. Too formulaic, not enough action, no femme fatales, detailed police procedures descriptions instead of snappy dialogues etc. I preferred (and still do) the more vivid world of PIs.

I have learned to appreciate good writing and intelligent storytelling (I hope) since, but I still couldn't enjoy this one. Its subject is juvenile gangs violence which isn't exactly my cup of tea, although (like any other subject) it can be done decently or even brilliantly. The whole setup in this one just didn't work for me. How can you take seriously a bunch of kids that still live with their parents? And at the same time, they organise their gangs (they call them cliques) into mob-like hierarchies with counsellors, secretaries, war chiefs, etc. Sounded a bit silly to me, to be honest...

There's no mystery, and it is a good example of content being sacrificed to the form. Our detectives' investigation runs in parallel with the reading of the gang leader's confession statement in flashbacks after being arrested. So the whole narration comes down to something like this: guy explaining what had happened and then Ed McBain describing how our heroes concluded that very same thing using the police procedures. It's an interesting concept, but it quickly wears off and becomes more and more annoying. My humble opinion is that this approach would function much more effectively if the guy were interrogated instead. There are pages and pages of that statement without any dialogues, and the whole thing is at times really hard to digest.

Title:
Don't get it. It probably refers to Nesbitt, a chief of Yankee Rebels, but I can't remember anyone hailing to him.

Cover:
Pretty unimaginatively constructed human face using the gangs' colours and weapons. I doubt Carpenter considered this for a poster of his masterpiece Assault on Precinct 13

I knew this was a drastic measure, but I reasoned with the council that if there is nobody left to fight a war, then the war automatically stops.
Posted by Jure P. at 11:29 PM