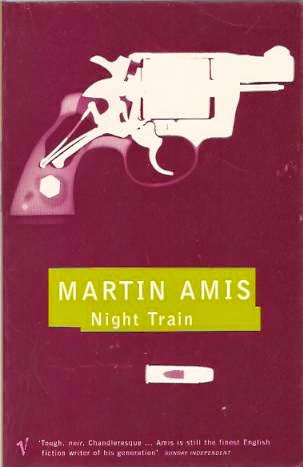 I was having my Saturday morning newspaper & coffee ritual last week and came across a review of Amis' last book. Glanced through it (it didn't make much of an impression btw) and then took a walk to the city centre to check out the flea market. So when I saw Night Train selling for 3 euro at the very first stall, it wasn't a coincidence - it was a sign from above demanding to check it out. And why not? In general, I don't often go for the "serious" authors disguising their stuff into pulpy crime novels, but lately, I've been pretty fortunate with picking up lots of great and interesting books from the likes of Sallis, Raymond, Manchette, Garnier and few others.

Night Train starts pretty cool and, as much as it's trying not to be, somehow formulaic. Jennifer, the daughter of the local police chief, had committed suicide, and our hero, detective Mike is asked by her heartbroken father to investigate the matter. And we can categorise this "matter" as murder since there were three bullets found in Jennifer's brain. For some reason (that I still can't get) investigation must not be official, so we have a nice police procedural mixed with the classic PI type of story. There's also some personal crap thrown into the mix; as a kid, Jennifer read stories to Mike when she (yep, Mike is a female) went through the alcohol detox.

So far, so good. It's a bit wild (jumping from past to present tense, mixing dialogues with narration) but still pretty straightforward, and it seemed to me it had some purpose and goal. The language used is a little weird and definitely over artificial; there's no way in hell that a tough police cop like Mike, who had solved over 100 murders and is about to retire, would talk and contemplate like she does. But still, it's cool, and some of the lines are actually pretty fucking funny (see 'dames' section of the facts).

But quite early came a "Wait a minute, this is bullshit!" moment. The whole thing doesn't move anywhere, makes less and less sense as it goes on and becomes dull, pretentious babbling about the meaning of life. "Witty" jokes and "profound" observations became way too repetitive and distractive, and it seemed to me that they were simply used for hiding the author's inability to express himself concisely. And at the same time story steadily falls apart. I was sure that the main twist would be some pathetic mind fuck about having no twist at all. It doesn't exactly turn out like that, but close enough: the big twist is that whodunnit is not actually revealed. Or maybe it was (Trader would be my guess); to be honest, I wasn't paying much attention towards the end and just wanted to finish it off.

Written for the reading clubs and dinner parties. Probably not bad, but definitely not for me...

Title:
Night train keeps getting mentioned repeatedly in various contexts, symbolising all kinds of shit. The first time we come across it, it is actually pretty funny. Our hero's apartment is located near the railway line, so because of the noise it causes, the night train is "something that keeps my rent down". But pretty soon, the good old night train starts to symbolise everything and nothing and eventually, I got bored with trying to decipher all that crap. Judge it for yourself:

Cover:
X-ray of a gun. Somehow related to the story (gun definitely is), but I guess the whole concept is another one of those metaphorical nonsenses. You know, like seeing the truth through things etc.

Cool lines:
Not even Italian police are sentimental about full moons. You're looking at a workload increase twenty-five to thirty-five per cent. A full moon on Friday night and you're talking a two-hour backup in the emergency room and long lines trailing in and out of Trauma.
Posted by Jure P. at 11:38 PM