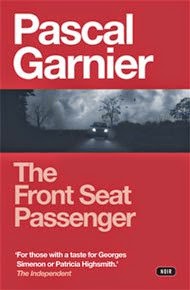 This one gives the psychological thriller genre a whole new definition. Revenge story with a "hunter becomes hunted" twist where most of the action and mystery takes place in our protagonist's head. We get to know very few facts about Fabien's life but plenty of his mental state. Which is, mildly put, not good. He's in a fucking state of disarray, and it seems to have some complex originating from the childhood when his mother abandoned him and his father. He definitely has issues with sex (mental ones; he can get it up all right), has a strange attitude towards children etc.

Sociopath, pervert, psychopath? To be honest, I have no idea. I think he's a nice guy but really messed up. Would a sane person come up with a plan to seduce his cheating dead wife's (also deceased) lover's wife? And I'm not even sure Fabien wanted to do that. He just decided to stalk her, and somehow they ended up in bed together.

Intriguing reading, totally unpredictable. Had no idea what our hero's intentions were in the first place and what the hell was he about to do next (that breaking into Martine's house?). Especially the first half is mind-blowing with lots of stuff going on. It slows down a bit later and (with a cool twist) becomes almost normal. By normal, I mean that Martine's madness is much more straightforward and, for some reason, easier to understand. If nothing else, her actions leave no doubt about her mental state...

So it's far from being whodunit (unless you are a psychology student), but still, I liked it a lot. Short and intense, unique, dark but also funny at times (see the 'cool lines' below), written with great style and easy to follow. It reminded me of Manchette's 3 to Kill. Crazy guys, these French and I'm very surprised that they are not more well-known. I couldn't find much information on Garnier online (nothing on Wikipedia about him!?) and would be grateful if anyone would share some interesting articles or interviews.

Dames:
Martine: "The other man's wife looked singularly uninteresting. She was a pale little blonde of about thirty, with staring blue eyes, practically no lips, and dressed in navy and beige. She looked like an over-exposed photo, with so little presence that one wondered if she was capable of casting a shadow."

Madeline: "Madeline appeared to be made of sterner stuff. She was a muscular fifty-year-old with the sharp eye of a bodyguard under a fringe of brown hair sprinkled with grey."

Title:
A bit enigmatic: there's a scene in which two women take Fabien on a trip towards the location where his wife died. One of them insists that he takes a front seat (btw - he doesn't drive and hates cars), so the whole situation is a bit unsettling and menacing. So I thought the title was just another little mind-fuck that I didn't exactly understand. But then I'd realised that book's title literal translation was actually "Place of Death" (I can't speak French, but Google translate did confirm that). I hate it when publishers/distributors change titles of the books/movies, but I must admit that in this case translation sounds cooler.

Cover:
Photo of a car in the night is pretty cool and noir-ish, but it should be larger.

Cool lines:
They glanced briefly at Fabien and pulled the handle of a sort of drawer. Sylvie slid out of the wall.
"Is this your wife?"
"Yes and no. It's the first time I've seen her dead. I mean, the first time I've seen a dead body. It's not at all like a living person."
Forlani and the men in white coats exchanged looks of astonishment.
"It's very important, Monsieur Delorme. Do you recognize your wife?"
Of course he recognized Sylvie, but not the smile fixed on her face.
"Yes, yes, it's her."
"Do you know what her final wishes were?"
"Her final wishes?"
"Yes, whether she wanted to be buried or cremated?"
"I've no idea... I imagine like everyone she didn't want to die at all."
Posted by Jure P. at 12:24 AM