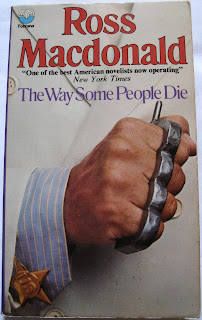 Early Macdonald. This is the third Lew Archer novel which chronologically continues after The Moving Target has ended (btw Miranda Sampson and Dwight Troy are even mentioned in this one).

It starts as a simple case of a missing/runaway and not too innocent girl who gets mixed up in the company of bad men and - as expected - which turns into a complex mystery involving drugs, gamblers, gangsters, movie people etc. Bodies start to pile and soon - as expected - it's not just about solving the case in a classical whodunnit style, but it's about the dark souls and moral dilemmas that our white-armored knight needs to face and deal with:

I knew if I didn't go back for her I wouldn't be able to forget her. A teen-aged girl with heroin in her veins was the stuff bad dreams were made of.

So - as expected - another Macdonald's masterpiece. Especially interesting and enjoyable to read since his style wasn't really polished and defined at this early stage of his career. But nevertheless it's simply brilliant and another timeless classic. Just need to read his stuff every now and then in order to wash away some 'modern' junk and remind myself from where most of the good crime books originate.

Title:
Cool sounding, but it needs to be said that nobody dies in any special way here.

Cover:
Pretty average. And although there is a guy with a brass nuckless, this nasty piece of work doesn't play some major role.

Blackouts:
One. Not described terribly vividly:

In any case, I'd been a pushover. I was ashamed to open my eyes. I lay in my own darkness, face down on something hard, and endured the thudding pain at the base of my skull. The odour of some heavy mantrap perfume invaded my nostrils. After a while I began to wonder where it was coming from.

Cool lines:
There was something the matter with his eyes. They were brown and wet and protuberant, as if they had been dipped in muddy water and stuck on his face to dry.

The giving and receiving of money, its demand and refusal, were Dowser's basic form of communication with other people. That and the threat, the blow, the inflicting of fear and pain... He grunted, and gave me a hundred-dollar bill. A piece of money takes its feeling from the people that have handled it. This money twisted in my hand like a fat green tomato-worm.

"You're Archer! How did you get here?"
"It all goes back about thirty-seven years ago"[The Coolest!]


He was kind of puppy who would lick any hand that he was afraid to bite. It was depressing not to be able to hit him again because he was younger and softer and too easy.

Her type had been invented to make man comfortable. Without a man to be nice to, she didn't know what to do with herself at all. And she was without a man.
Posted by Jure P. at 9:40 PM