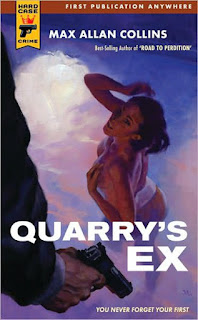 My favorite Quarry so far without a doubt. Not as violent (or dumb) as The Last Quarry and even more suspenseful and overall entertaining than Quarry in the Middle.

This time around our anti-hero hit-man of hit-men operates on the location of the B-movie shooting set. Show business related crime novels are usually good fun and since this exploitation flick is titled Hard Wheels 2 we can expect lots of weird characters. Its main star is former playmate of the year who is also a mistress of the mobster who financially backs the movie (=executive producer). This guy also fucks another member of the cast, but lovely bunny is not too concerned with that because she's fucking the director (and also gives our hero a quick blowjob). Male star is a gay (queer as a three-dollar bill) and there are some suspicious extras/bodyguards bikers and of course creative duo of producer and director.

Quarry is hired to protect the director but his assignment becomes a bit unusual when he discovers that his ex-wife is now married to this guy and that she also stars in the movie. And this is first cool trick that Collins pulls because we all know that coincidences don't just happen, at least not in pulp novels. There simply must be some sort of a connection, right?

But here we also get a solid plot that thickens slowly and nicely. Author knows exactly what he's doing and where he is going. Quarry is no detective (hell, he doesn't even pretend to be one!) and doesn't go around interviewing people but he solves the second part of his job (finding out who has ordered the hit) very efficiently using simple process of elimination. Ending is good and surprising in more than one way. Double indemnity will be the name of the game, but I won't reveal how Quarry will manage to deal with his ex. Get the book and find out yourself, I'm sure you won't be disappointed.


Location:
80s I think, in a small town Boot Hill, sixty miles south of Las Vegas, Nevada. But since we are used to Quarry being elusive and secretive it's not surprisingly that this place cannot be found on Google maps.

Body count:
4 + another one from the past, not related to this story

Title:
It's okay although his ex is not really the central character. Maybe something like "Quarry goes to Movies" would be better.

Cover:
Really cool and dark one. Loved those colors. Illustration is copyrighted by Gregory Manchess and it's accurate enough as there's a scene where Joni is swimming in the pool and Quarry comes over with a gun. But she's not naked; "her bikini tonight a red skimpy thing"

Cool lines:
"Will there be nude scenes?"
"Frequently. She was not hired because she gets mistaken for Meryl Streep"
"Jim, you and I know the number of Playmates of the year who have gone on to star in films can be counted on one hand and maybe a dick. What makes Miss Goodwin special?"

I skipped lunch. It's not that killing some fuck freaked me out or anything, but neither did I work up an appetite.[The Coolest!]


The producer looked exhausted, maybe from having to deliver that speech about the choice of Tiffany being artistic and commercial.

He was on my left, the .38 in his right hand. and was aiming his dick with his left. Ambidextrous pisser, Jake was.  [The Coolest!]