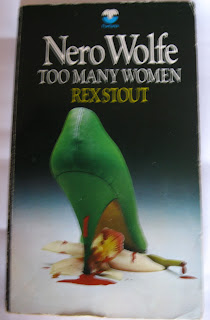 Nero Wolfe, obese NYC detective, is hired by some big ass company to investigate shady circumstances surrounding accidental hit-and-run death of one of their employees. His assistant Archie Goodwin is at first reluctant and doesn't really take the case seriously (It wasn't a lead pencil leak, it was murder.) but eventually he's persuaded by the big fat paycheck (Naylor-Kerr is good for anything up to twenty million). Archie then 'infiltrates' this company and ends up among 500 women (clean, young, healthy, friendly, spirited, beautiful and ready - it was an ocean of opportunity) who are all suspects. Kind of. Throw into the pot scheming of top executives and their family ties and we have a mystery.

This is definitely my least hard-boiled, non-noir of the year. It's kind of Agatha fucking Christie written for housewives so they can be amused by witty dialogs and naughty gags (slightly sexists if you ask me). Don't get me wrong  - style is okay but I got fed up with it after few chapters. Especially because story doesn't move anywhere (a corpse per 100 pages) and more than once I had a feeling that writer was more concerned about his characters than he was with a plot. Which gets totally stuck after one week and then great detective forces its development by simply:

Truly brilliant. So they fake some evidence and case is solved. I just wished they would do so some 50 pages sooner...

Apparently 33 Nero Wolfe novels were published but this is definitely my last one. It's not bad but it's just not my style. And by glancing through reviews on Amazon I was a bit surprised to find out I'm the only one who dislikes this.

Dames:
Miss Hester Livsey - "...she was in some kind of trouble, real trouble that no one but you would understand and no one but you could help her out of."

Rosa Bendini who "knew her way about."

Cover:
Pretty cool, I think it was reason why I'd bought this in a first place.

Cool lines:
Receptionist was away past  the deadline, having reached the age when it is more blessed to receive than to give.

"I ought to warn you that his charges have not joined in the post-war inflation because they were already so high that a boost would have been vulgar."

[when identifying a corpse ran by the car]
It was unquestionably him, when you had made the mental adjustment required by the transformation of a sphere into a disc.[The Coolest!]


"You must be aware that she is completely devoid of intellect, and therefore that her opinion on any subject whatever is without value. She is not a moron, but the quality of her brain is distinctly inferior."[The Coolest!]