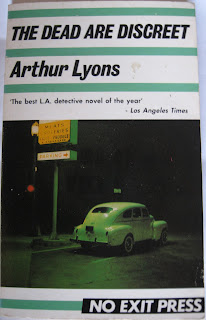 It starts very promising, in the best tradition of the old school hard-boiled tradition: Los Angeles, movie stars, porn business, occultism, phony religious leaders... Our hero too is (stereo)typical P.I. - he is a bit hanged-over when he gets hired by some hot-shot lawyer. We soon learn that he used to be a reporter but was not only fired but had actually served time for not revealing his sources. So we know that he's a honorable man, man of integrity. There's a nice episode, a bit Marlowe-esque, when some asshole tries to bribe him with 5 grand. He's tempted but instead chooses to drink it away: "By the time I was down to the bottom of the cup, the check had stopped glowing... I repeated the sequence ... and the check was gone."

Very good start, written with lots of skill and style. Not forcing or overdoing it at all, just taking its time to introduce the characters and lay plot's foundation. Real page turner, I was definitely hooked!

But then came chapter 11 (of 21) which starts with: "By the following Wednesday, I had checked out most of my leads and come up with a big, fat zero."

Okay, it's not exactly the end of the world and our Jake is certainly not the first detective to be stuck in the case, but still - WTF!? And then it gets from not-very-good to bad to even worse. His detective skills are pathetic and almost non existent. For an example: for no apparent reason he tails a guy who was together with a victim when she had a car accident some time ago (not even related to the case). This dude meets another guy and our lost hero just decides to start tailing that one.

Shit like this becomes obvious even to Jake and at the start of 17th chapter he is so confused that he tries to summarize situation, but fails to do so and simply concludes that "There was something else, some unconscious, instinctual force that had a ring in my nose and was pulling me along, and that was what bothered me. I never did believe in playing hunches, but that was what I was doing."

So to conclude - it just turns from the first rate mystery into the third rate thriller. The only thrill I felt was to finish this damn book as soon as possible. Ending is pretty okay though, didn't see it coming.

Body count:
2 at the start and only one more later

Dames:
Sheila Warren, the victim. Gloria Pilsen, her sister. Sasha, "more of a bitch than a witch". Allison Shaw, the actress.

Blackouts:
Two. And both of them in the same chapter! First one is pretty standard: "There was a lot of pain and a lot of light flooding in my head all at once - too much to think about, so my brain decided to go to sleep for a while." Second one is more nasty as he gets kicked in the balls: "My body convulsed and the pain instantly filled my intestines, then my stomach. I vomited and passed out." Ouch!!!

Title:
Cool but its meaning escapes me no matter how hard I try to understand it.

Cover:
Cool photo of an old car but its relation to the story escapes me no matter how hard I try to understand it.

Cool lines:
When she turned and smiled, her eyes said things. One of the things they said was that the martini in her hand was not the first one she had had today.

Recollections moved across his face swiftly, like steel balls in a pinball machine trying to hit 500-point pocket.

He looked at me as if I were a blood-rare steak he had ordered well done and had already sent back twice.[The Coolest!]