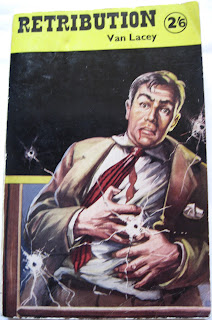 Brad Connor, no-name and nobody kind of guy is minding his own business when someone tries to kill him. He survives the attempt but his good friend Matt is not so lucky. They both have just one enemy in common but he's supposed to be dead - Henri Rheims, sadistic asshole and devil himself reincarnated, was a prison warden in a Japanese camp where they were held captives and he had died in a fire when camp was liberated. Is it possible that he had survived and is now looking for a revenge? And for a retribution!

The answer is of course yes. And not only he has survived the fire, he came to the States to expand his criminal activities. He is now  Jonathan Byrd, host of sinister parties where he is drugging prominent scientists (with marijuana!, sic) in order to reveal their findings about H-bomb developments that he can sell to Russians. The only obstacle on his path are potential witnesses who could recognize him. So they must die.

This is a basic premise and as you could probably figure it out yourself, it represents quite a problem.I somehow still cannot understand why would someone go through all the trouble of killing two guys (plus framing another one for murder!) who are convinced that he's dead in the first place!?? Especially - we learn that later - because he had completely changed his appearance in the meantime.

I think some more skilful writer could still pull something better out of this. But everything else is also so fucking sloppy and amateurish. There's no real reason (or need) for the Marie's character and development of their relationship is at best unnecessary and at worst ridiculous. Similar could be said for Hagen, GI man who gets involved in the case. Detective skills of two combined are pretty pathetic (I suspect something, yes. I don't know what. I wish i did.) and I cannot see why they needed to fly to LA to just interview a guy. Surely there were phones in America in late 50s?

It has some bright points worth mentioning though. Brilliant touch is that body of Matt is found in the morgue. Now how cool and original is that!? It really gave me high hopes at the beginning of some intriguing mystery. Another thing I enjoyed was a heavy use of slang as we do get more than decent dosage of dames and reefers and coppers, bad guys are heeled (=armed) and so on. I think my favorite one was: "She fished a mirror out of her white leather bag and okayed herself".

But dialogs are far too scarce. And so it is action (app 100 pages between corpses), so reading this was struggle sometimes.

Dames:
Evie the nurse. Marie the reporter. But "Dames'll be bad medicine kid, because the case is hot."

Cover:
Cool, comic book kind of art style. But not too accurate - Brad gets a shot at through window but he is not actually hit.

Blackouts:
Three of them - in fact book starts with one. On second occasion "ammunition truck exploded up above my left eye. I was out." and last one "I node-dived headlong into the cellar of limp oblivion."

Cool lines:
I smelt trouble. I was right. Trouble hit me. Hard. The slug would have paid me off if Matt hadn't yelled.
I was by that time as jumpy as a virgin entering the Tunnel of Love with an all-in wrestler.[The Coolest!]