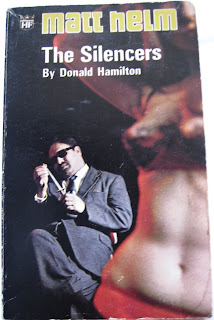 Silencers starts at American Mexican border where agent Matt Helm has been sent in order to bring back his fellow agent who's suspected double agent. She's a stripper in a sleazy Mexican joint and gets killed when Helm is about to get her. But just before dying she whispers some mysterious final words into her sister's ear. Classic stuff, plot thickens!

So Helm, like it or not, must cooperate with her sister to find out what the fuck is going on. Story soon moves on the road and concludes in some god forsaken mountains where military is conducting nuclear tests. It gets quite complicated and at times even hard to follow but let me assure you that Helm saves the day at the end. And that along the way leaves corpse or two behind him.

Better than plotting are characterizations and development of two main protagonists. Helm is as tough as nails, not at all sissy James Bond stereotype of agent. For example, when he gets an assistant operator, he's pretty indifferent towards him, because "Why bother to get fond of a guy, when you may have to sacrifice him ruthlessly within an hour?" And Gail is cool too, she has lots of style (Helm nicknames her "glamor girl") and I just loved those "My dear man!" exclamations.

Their relationship is pretty intriguing and in a way more interesting than actual chase after the government secrets. They keep playing cat and mouse game and exploiting/deceiving each other, we pretty soon learn that the only reason she's taken on this ride is because she's a part of diabolical plan: "They were counting on this woman to hate, despise, and, given the opportunity, betray me". Even them having sex doesn't clear things much because "In this business, there's a maxim goes: suspect everyone once except a woman you've slept with; suspect her twice." You can judge yourself how their affections progress:
Writing is good and tight and Helm is just cynical enough. Secret service operations are described with a great deal of details and accuracy (I suppose) and it seems like Mr. Hamilton has done his homework. Good tense spy thriller mystery from the cold war era. Maybe a bit outdated, but still very enjoyable.

Dames:
Secret agent Sarah aka Lia the stripper. But she's out of the picture very soon and then her sister Gail Hendricks takes over.

Body count:
Starts slowly with a shootout in a stripper club, but reaches 10+ at the end.

Location:
Starts in El Paso, Texas at the Mexican border and then moves to the mountains of New Mexico.

Cover:
Cool and pretty accurate. There is a mean looking Latino bad ass playing with his knife and a stripper dancing in the foreground.

Cool lines:
Old, bold days when hotels were hotels instead of investments and cattlemen were cattlemen instead of oil magnates.

The gentleman who preceded me at the desk wore a big white hat and yellow cowboy boots. His silver belt buckle was the size of a TV screen. I was in Texas.[The Coolest!]

Her meekness was as phony as a drunk's New Year's resolution.
Posted by Jure P. at 10:52 PM