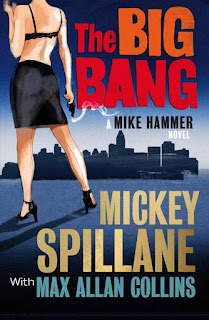 Ok, I know I’ve bitched about Spillane but still I couldn’t resist buying The Big Bang. At the local bookstore they were selling it for next to nothing and I decided to try it out since this is Mike Hammer novel and not some sissy old aged Jack Stang crap.

Big Bang starts with some big fucking bangs alright! Hammer springs into action no sooner than in the second paragraph (!!!) by smashing the guy “into a bloody mess“! His buddy gets it even worse: “I broke billy boy’s arm between the wrist and elbow, took half his teeth out, snapped his jaw loose from its hinges, and send the bastard’s balls on a trip…” And all he could think of was “..what the hell these chintzy little shits thought … taking on an old tiger.“

So just in case that by some miracle we have forgotten about Mike Hammer we are immediately back on track. Pace of course steadies a bit (could it possibly go faster and more violent after such an opening!?) and leaves space for the story to develop. In this one we are dealing with drugs. There’s some big fuck-up happening in New York and streets are bone dry. Junkies are climbing walls and for the last six months stuff has been provided in small lots. Mafia (Evello family, also Syndicate) is puzzled and pissed off about their shipments getting intercepted by police and there’s some new gang lead by the guy named Snowbird trying to take over their turf. And in the meantime they are all just waiting for the Big Bang - super shipment from Europe.

Hammer has just returned to the city and all he wants is to chill (cool his heels) and smoke his Luckies when he gets pulled into this mess. To understand his actions (and reactions) we need to examine his attitude towards drugs. I think the best way to do that is to let the main man explain it himself:


So it’s no surprise that he starts a war against anyone and everyone. And bloody war this will be, by the time he’s finished body count will rise into two digits number. In the process he’ll of course avoid police (“Fuck them!”) and get unlikely ally in colleague professor whose personal loss made his attitude towards drugs even less tolerable (!!!?) than his. Plus of course he’ll fuck a girl or two because – to use his words again – “I was just a human”.

This stuff leaves you speechless; it’s too brutal even for Spillane. It’s probably the best possible cheap pulp fiction on the market and once I got over initial shock I had actually started to enjoy this insanity. I mean plot is tight and writing is good, but there’s just nothing holding it back in its political incorrectness. Okay, we were used to Hammers contempt of law, his macho misogynistic persona, mocking of homosexuals, vegetarians, pacifists, communists, hippies etc, but here everything goes into the tenth degree. Novel is too (or should I say still) extreme even in this day and age and I doubt very much that any of contemporary writers would go that far in creating such an conservative asshole main protagonist. I wonder whether Spillane (or his publisher) was aware of all that in 60s when he wrote it and had maybe abandoned it for these reasons.

Unique stuff. Was and still is.

Body count:
Thousands! Hammer lets poisoned heroin to be distributed on the streets so “Thousands would die. And their friends and families would be so consumed by rage that they would rise up as one and they would take down the Maffia. Hit the Maffia, kill them all.”

There are 14 "individual" killings (only two of them not committed by our Mikey boy). Let’s see few of the more graphic ones:
Yes, it is - like his pal Pat Chambers has concluded - worst mob bloodbath since St. Valentine’s Day!

Dames:
His secretary/lover Velda Sterling of course who is holding down the fort while he’s out chasing Indians. Shirley Vought, society girl who has chosen to associate with wrong crowd.

Blackouts:
Yes, surprisingly there are two of them. First one is not described very profoundly. Just briefly that “I was clawing for the .45 when the chloroform found my face and my last memory was them dragging me.” Second time he’s drugged by LSD and description is much better. Hammer sees some collage pictures of Buster Keaton, Guadalcanal, Woody Woodpecker, Lana Turner and Adolf Hitler.

Cool lines:
She had a tuna salad sandwich. She didn’t eat meat, she said. That would be news to the tuna.[The Coolest!]

She nodded and gave me a look that made the need-anything-just-whistle one Bacall gave Bogie seem like kid stuff.

She began by falling to her knees to worship the part of me that seemed to be in charge.

“What kind of condition is he in?”
“Cold,” Pat said.
“The kind of cold you get when they file you away in a drawer at the morgue.”