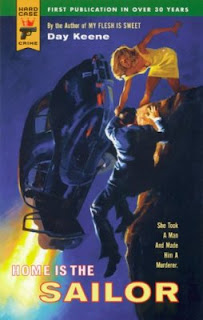 This is quality, really good stuff. Maybe because its style belongs to some different times or maybe because writing is so good, but I just couldn’t put it down. Or maybe it is because it is just weird and totally predictable but at the same time you have no idea what next chapter will bring.

It starts conventionally with Swede Nelson just coming off the ship finishing his last job and planning to settle down on some farm in Minnesota with a girl he’s going to merry. So of course he goes to a gambling joint, gets drunk and into a fight. So far so good, it does get a bit strange when some dame saves him and his money without apparent reason (they don’t have sex). And then things go really weird and wild because in just three days our couple gets madly in love and decides to merry. And, oh yes, in the process they do kill one guy.

So we have classical set-up with widow femme fatale + sucker + corpse that need to disappear. What is really great and original is that our hero knows all that and still doesn’t fuck off out of the town. He feels he’s trapped in this vortex without way out and basically just heavily drinks rum while waiting for inevitable.

Story takes its time and goes very slowly and sending just enough warning signs (loved the one when she squashes a bee in the car!). In the meantime few characters are introduced (local law enforcement, few shady helpers at the inn she owns) and also some dark mystery from past appears every now and then in the local newspaper. Just enough to pay attention…

Superb writing - simple, tight and stylish without being too over the top. Great plotting and suspense with good mixture of mystery, drama and thriller and hard-boiled ending. Plus hot women and some sex, just the way we like it!

Dames:
Miss Corliss Mason, after Swede marries her I guess we can call her Ms Corliss Neslon. Sophia Palanka, mysterious stripper wanted for a murder. Mamie, cute brunette from the Inn

Cool lines:
I sat up on the edge of the bunk and opened one eye, cautiously. The first thing I saw was vitreous china, a washbasin, and a stool without a seat. I was in four-by-seven cubicle. Three sides of the cubicle were solid steel. There were bars on the fourth side.

I was glad he had one (handkerchief). It would be something to stuff down his throat after he and I had finished our talk.
Posted by Jure P. at 11:58 PM