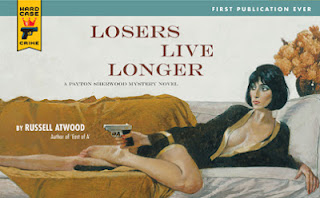 Similar to Little Girl Lost, but not as good. Again we are in present time in NYC with lonesome PI on the case. His name is Payton Sherwood, he’s a washed up investigator waiting in his shabby office without furniture and slow dial-up internet connection waiting for the clients that never come. He used to work for some big detective agency under mentorship of his friend Matt but was fired few years ago after fucking up simple surveillance job. Number of detectives involved rises to three immediately in the first chapter, because there is also legendary old school sleuth George “The Owl” Rowell who wants to employ our hero for simple job of “flushing a tail out into the open”. But detective count is quickly restored back to two, because Owl is killed (as he is no loser, it is probably from here that title comes from) even before he can fully brief Payton about the job. But he smells big money and has no other work anyway, so fun can begin.

We find ourselves in the usual hard-boiled underworld of film stars, drugs, corporate crime, kids trafficking and femme fatales. And it’s all happening rapidly fast as everything takes place in one day. Story gets quite complicated quickly and there are some plot holes, but they are not too big and the whole impression is still okay at the end.

There are some other flaws. Biggest one is total absence of police. At the end body count arises to nearly 10 and in all this time there’s no sight of the NYPD which seems a bit odd, doesn’t it? Second one, maybe even more important, is lack of motive that drives our hero so hard. He wasn’t even a friend of the dead detective, hasn’t received any money for the investigation and yet he let himself be beaten, chased and so on.

Another thing I’ve found a bit annoying is authors near obsession with New York. There are just too many of those “I went to street X along venue Y crossing park Z” and there’s even short paragraph related to 9/11 (fortunately not related to our story, war on terror doesn’t take place here). It probably makes reading more interesting for residents of the Big Apple, but I’m certainly not intrigued enough to search these places on the Google maps.