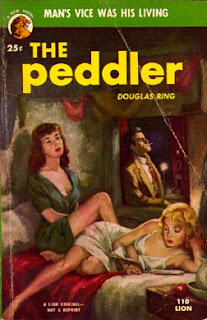 
Unusual one because our main hero is totally and completely unlikable. He’s a peddler driven purely by the greed and has zero respect for women. And it goes from bad to worse. Which means something if you know that already pretty much at the beginning “He thought hungrily about the huge, steady flow of dollars. In his mind grew an obscene image of a great fleshy whore lying on a bed, her legs parted and a constant stream of dollars spurting from her: dollar bills, ten-dollar bills, hundred and thousand-dollar bills, filling the room, smothering her, flowing out of the doors and windows, a cascade, a flood of money rushing day and night from the woman’s thighs.”

So can a book with such a negative main protagonist be any good? Probably, if there’s a good plot built around some criminal behaviour (robbery, murder, blackmail, insurance scam, anything) involving interesting characters and quick dialogue and action. But that would be of course crime novel, which Peddler is not. It’s character-driven moralistic drama about a small-time crook rising from the gutter. And in his world there is no grey and certainly no white. Everyone’s crooked, damaged and basically just no good. 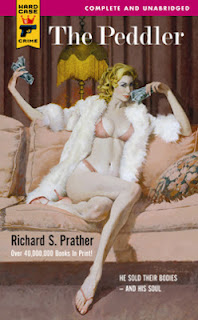 Which is not really a problem. Problem is that there’s not a lot of action or happening (we get our first corpse on the page 117) and I also found its pace a bit problematic. Events are taking place in real time but then there are time gaps of one year and more, so you can never really settle into it. I think narration might turn out better if the story would be told in flashbacks (like memories of the dying man or man waiting on the dead row or some shit like that).

But writing is really good and I totally loved and enjoyed its the use of language and slang. When was the last time you read something like “That trigger-happy yentzer tossed a pill on me. I’m supposed to catch it in my teeth?” There’s lots of hard-boiled shit like that and it makes the book somehow really authentic. Maybe author himself was peddler before he discovered his writing talents?

Nah, of course he wasn’t. I just checked him out on Wikipedia and it turned out he was huge after the WW2 and had created PI Shell Scott in really long (40 or so) series of novels. Will put one of those on my to-do list, maybe this Scott guy was such a sissy guy that Prather got tired of him and wrote Peddler as an outlet for his frustrations.


Hero:
Tony Romero, the Peddler. At nineteen was five feet ten inches tall, with much of his weight in strong well-muscled arms and legs and heavy shoulders.

Body count:
6 (all peddlers, all more than deserved it)

Cool lines:
I feel as broken up as if I’d just heard somebody chipped a piece off the rock of Gibraltar. (Ginny’s receiving the news about her husband’s death)

I came back to report on a club. Needs some alterations. Couple dead bodies got to be moved out. And one out of here, maybe.
Posted by Jure P. at 5:29 PM