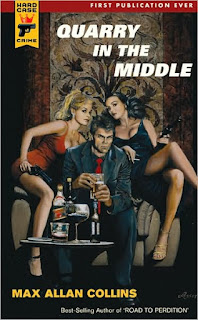 I’m not big fan of Max Allan Collins but I admit he’s a good writer and his stuff is easy to follow and entertaining enough to pick up every once in a while. And as prolific as he is, maybe I just missed his better stuff somehow. Anyway, I wasn’t in the mood for experimenting with some new authors and decided to finally check out one of his Quarry books.

I’ve picked this one in the book store because it has cool opening line (I had a body in the trunk of my car). I think it’s at least fourth novel in the series and it has really original premise. Our hitman Quarry has in possession some kind of register of his fellow trade colleagues obtained from his former (before he killed him) employer guy named Broker. So he uses these files in a very clever way – he randomly picks up some assassin and follows her/him (maintaining surveillance) in order to find out who the next target is. Quarry then contacts the target offering discreetly elimination of the original killer and eventual bonus if he finds out who has ordered the hit (and yes of course, killing the bastard too).

So this set-up brings him to some little town run and divided by two criminal branches of Chicago organized crime. And according to the book title you would expect some sort of “Yojimbo – Fistful of Dollars – Last Man Standing” type of shit, which just doesn’t happen. Sure, there is a bit of scheming and double play and such, but far too little to make it outstanding. Which is disappointing enough, but even worse is that there’s hardly any mystery or suspense. Final twist is soooo predictable and I’ve seen it happened so many times: author falls in this trap where she or he neglect to introduce more characters and subplots, so by the end of the book there’s just one of them who can be actually guilty. What makes this ending especially funny is that our hero himself knows that and he cracks the case simply by:

Culprit: “What makes you think that I took out the contract?”
Quarry: “No other candidate makes sense”

But I’m probably being a bit nasty because book isn’t bad at all. It’s just not a crime novel; I would classify it more into thrillers section. I liked the style of writing, it’s tight and clear without much ballast with some cool and well conveyed passages between past and present explaining Quarry’s story. I’ve found some lines hilarious which, strangely enough, may even damage the wholesome impression because sometimes I thought author had troubles deciding if he is writing hard boiled hitman story or script for H’Wood thriller/comedy type of crap that needs to feed Bruce Willis with quirky dialogue. It also relies too much on descriptions and not enough dialogue and lacks a little bit of higher pace, but that is probably because there’s really not much going on – guy comes into town, kills some bad guys, has sex, gets beaten, plays poker, has some more sex, few more bad guys are dead and then he collects his fee and goes home.

All in all, it’s good stuff. I think I’ll check Quarry again.

Dames:
one good (kind of), one bad and one absolute angel. Teaser, not spoiler: Quarry fucks two and gets blow job from one.

Body count:
5 (they all deserved it)

Cool lines:
Disco was dead, which was fine by me, only I wish somebody had paid me to kill a fucker.

Kind of girls you don’t take home to mother…unless mother is a doctor specializing in the clap.

Little blackjack dealer. Redhead. She likes you, Jack. I could fix you up. Kid can suck the chrome off a ’71 Caddy.